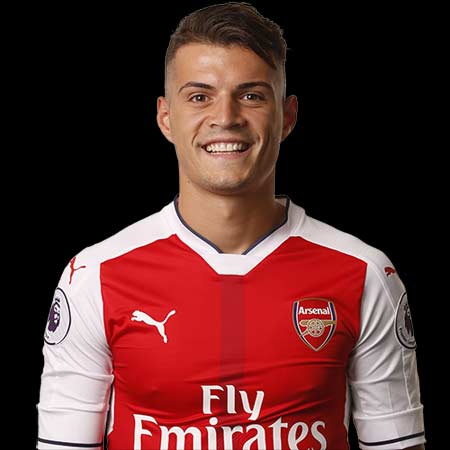 Dubbed as "Young Schweinsteiger" by Swiss football coach and former German player Ottmar Hitzfield, Granit Xhaka is an emerging midfielder for Arsenal FC. His style of play is usually aggressive and is the leader in the pitch.  He was named the captain of Monchengladbach team at the age of 23 in 2015/16 season. Before that Gladbach had worst start of the season losing five opening matches of the season and after the captaincy to Xhaka they finished the season with Champions League qualification.

Granit Xhaka is also famous for his long-range shots from the center of the midfield. Most of his goals in Arsenal shirt is long ranger effort from outside the box. Apart from his powerplay from midfield, Xhaka is an aggressive player in the field and has received nine red cards in just three years. He is originally from Albania and his blood brother represents Albanian National team while Granit Xhaka represents Swiss National team.

Granit Xhaka was born in Basel, Switzerland to father Ragip Xhaka and mother Elmaze Xhaka in 27th September 1992. His parents were originally from Serbia who immigrated to  Switzerland due to the Civil war.

Xhaka's older brother Taulant Xhaka is also a football player who plays for FC Basel and Albania National team. Both of the brothers joined the youth academy of FC Basel during the teen years. Since 2008 Granit Xhaka was promoted to the U-21 team of Basel in which he played 37 games and scored 11 goals.

At the start of 2010/11 season, Xhaka was promoted to the first team of the FC Basel. He made debut for the first team in 2010/11 UEFA champions league qualifier game against Debrecen in which he scored a goal in a 2-0 win. His first league goal for FC Basel came against FC Thun in a 5-1 win. In his 2 years at FC Basel in the senior team, he scored 2 goals and won two leagues titles and one Swiss Cup.

On May 2012 Xhaka was transferred to German club Borussia Monchengladbach at an undisclosed fee estimated to be around $10 Million. On 25th August he made his Bundesliga debut in a 2-1 win against 1899 Hoffenheim. He scored his one and only goal of the season against FC Nurnberg in a 3-2 loss. He stayed at Gladbach until 2015/16 season and played 140 games for the club scoring 9 goals in the process. 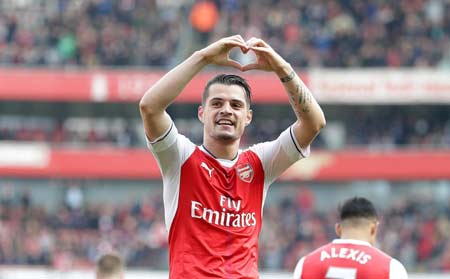 On 25th May 2016 Xhaka was transferred to Premier League club Arsenal FC for the fee estimated to be around $47 Million. Xhaka made the first appearance for Arsenal in pre-season friendly against MLS All-Stars. He made his debut for Arsenal in the opening match of the season against Liverpool in a 4-3 loss.

His first goal for Arsenal was 25-yard long ranger against the Hull city in a 4-1 win. In his first season at club Xhaka won the FA Cup. Xhaka began 2017/18 season with Community Shield win over Chelsea. He scored the first goal of 2017/18 season in a 3-3 draw against Liverpool which was a 25-yard shot.

Granit Xhaka has featured for the Swiss team in various under 21s and youth squads. He was also part of the Swiss under 21 team that reached the final of the UEFA European U-21 Championship. While Granit Xhaka's older brother decided to play for his birth country Albania, he chose to play for Switzerland.

Granit Xhaka made his senior team debut for Switzerland in UEFA Euro 2012  qualifier against England in a 2-2 draw at Wembley Stadium. He scored his first goal for Swiss National team against Luxembourg in a 1-0 win.

He played all the matches of 2014 World Cup Qualification for Swiss national team and was part of the team that played in Worldcup 2014 Brazil. He scored a goal in the 2nd match of the tournament in a 5-2 loss against France. 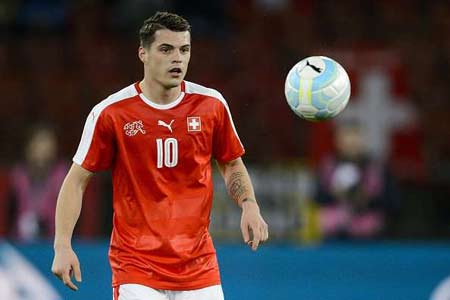 Xhaka also featured in 2016 Euros. In the match against Albania, he was playing against his brother Taulant who played for Albanian National team. Switzerland reached the last 16 of the tournament eventually losing to Poland. In his 61 appearances for Swiss national team, he scored nine goals.

Granit Xhaka receives $121,555 per week salary from Arsenal FC.  His net worth is estimated to be around $15 Million which he receives mostly through his salaries from Arsenal FC and through various endorsements and contracts. It is reported that he has also bought a house in London worth $6 Million.

He was signed by US footwear company Under Armour in an endorsement deal. The financial reports of the deals were not released in public. He also has a large no. of car collections which include BMW, Porsche, Audi, and Mercedes.

Granit Xhaka is married to Leonita Lekaj in July 2017. Similar to Xhaka she is also from Kosovo-Albanian Family. Both of them met during Xhaka's time at Monchengladbach where Leonita was working as a staff.

Granit Xhaka's father Ragip Xhaka was sentenced to prison for 3 years for protesting communist Yugoslavian rule in Kosovo. Xhaka's mother Elmaze is Swiss but as her two sons play for different nationalities she is a neutral fan and is often seen with her daughter in law during a football match in the stance.

It is reported that both have a close relationship. Granit Xhaka also has a little sister named Agnesa Xhaka.  Granit Xhaka is Muslim by religion.