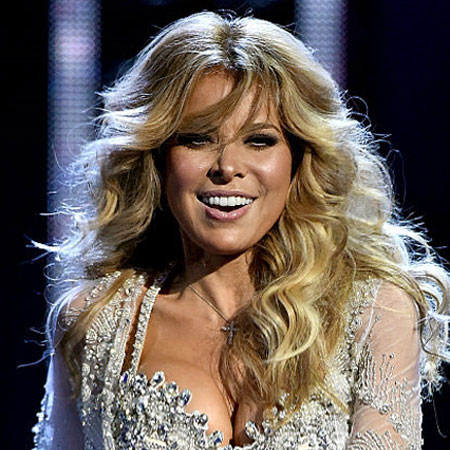 Gloria Trevi is a Mexican singer, songwriter as well as actress. She is well known for winning the Premio Lo Nuestro award for Pop Female Artist of the Year in 2009. Trevi also received the BMI presidents Awards for her impact on Latin pop at the 23rd BMI Latin Awards on 2016, March 2. Besides, Gloria has also built a successful career as a television hostess, music video director, and businesswoman.

Gloria Trevi was born as Gloria de Los Angeles Trevino Ruiz on February 15, 1968, in the hospital of Mugerza in Monterrey, Nuevo Leon, Mexico. She belongs to a mixed ethnicity and holds a Mexican nationality.

Gloria Trevi is the daughter of Manuel Trevino Cantu and Gloria Ruiz Arredondo. Her father is an Architect and mother was a dance teacher. Her parents divorced when she was 12 years old.

Trevi spends most of her childhood days with her grandmother and grandfather Luis Aurora.

Gloria Trevi moved to Mexico to pursue her singing career, in 1985, she became a member of a short-lived girl group named Boquitas Pintadas. Later in the year 1989, she released her first solo album Que Hago Aqui which scored the position of number 1.

The next year, Trevi released her second album Tu Angel de la Guarda which managed to beat the fame of the first one. This album was very controversial different from other artists' albums such as Lucero. In 1992, she released her third album, Me Siento Sola.

In the year 1994, Trevi released the singles La papa sin catsup and El Recuento De Los Danos from the album Mas Turbada Que Nunca, both hitting the top of the Billboard Latin charts.

Gloria Trevi married her boyfriend-turned-husband manager Sergio Andrade in 1998. They first met on the streets of Mexico City. After some time, the couple started dating.

What Happened to Gloria Trevi?

Andrade and her husband were charged with child abuse, child prostitute and also child slavery by Mexican police. They were even searched by Interpol but they did not find them even after a year.

However, they were arrested in April 2000 in Rio de Janeiro by the Brazilian police. The charges were later dropped which resulted in the release of her in 2004 after four years and eight months in jail.

While she was in jail, she acknowledged that she was pregnant and as the DNA analysis later affirmed, the father of the child was Andrade. She even claimed that the results of the DNA test had been doctored.

On February 18, 2002, Trevi gave birth to her child a daughter named Ana Andrade. But later, she divorced her husband in 2005.

Her Married Life With Armando Gomez