Gina Hecht is an American actor and producer who has been active in the industry since 1979 and has more than 90 acting credits in her name. She is very famous for her appearance in Mork & Mindy,  Dave, and  Seinfeld.

Gina Hecht was born under the birth sign Sagittarius on December 6, 1953, in Houston, Texas, United States of America. She is of American nationality while her ethnicity is missing. She is the daughter of stage actress Pauline Hecht. She was raised alongside two siblings:  a sister, Esther, and a brother, Harold.

Regarding education, she joined the University of North Carolina School of the Arts from where she completed her graduation.

The 67-years-old, Gina Hecht is a married woman. She has shared the wedding vows with a guy named Brian Herskowitz in the year 1988. The pair has shred two kids and both of them are daughters. 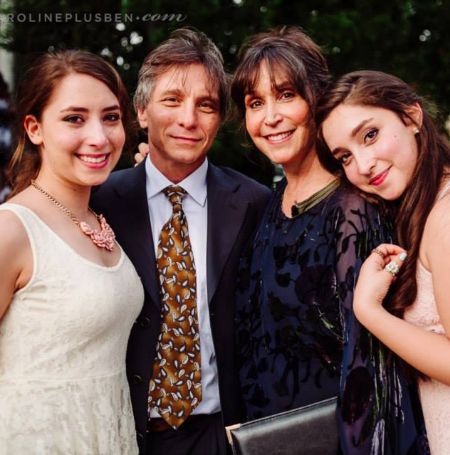 CAPTION: Gina Hecht with her husband and kids SOURCE: Facebook

Since then the pair is going very strong without any bad rumors regarding their relationship.

Gina Hecht has earned a decent amount of worth from her career as an actor since the late 70s. As of 2021, her net worth is calculated to be around $3 million.

She made her big-screen debut in 1982 from her appearance in the movie name Night Shift as Charlotte Koogle. After this, she has worked in several movies and has more than 15 movie credits in her name.

Her upcoming project includes Obviously Not a Child of God.