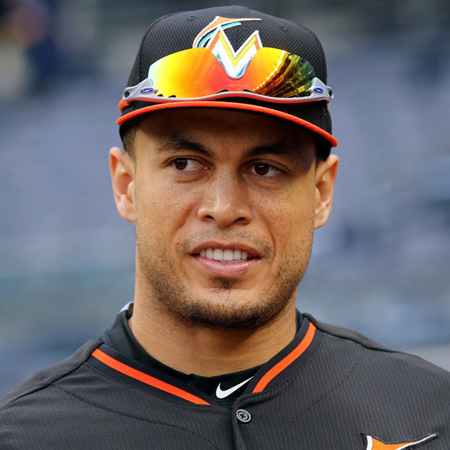 The 27 years old, Giancarlo Stanton is an American professional baseball player for the Miami Marlins of Major League Baseball. He signed the largest contract in sports history till date, worth $325 million over 13 years, after a dominant 2014 season where he hit 37 home runs.

The professional baseball player, Giancarlo Stanton was born on November 8, in 1989, in Panorama City, California, United States of America. Regarding his nationality, Giancarlo is an American and ethnicity wise, Giancarlo is of Irish and African-American descent.

Giancarlo was raised up in his hometown, Panorama City along with his two siblings, brother, Egidio and sister, Karirice. His father is Mike Stanton. Giancarlo also tried to play for Team Puerto Rico in the 2013 World Baseball Cla s sic for his mother who is of Puerto Rican heritage.

Giancarlo’s father, Mike is a former postal worker who inspired and encouraged him. Mike followed his son’s pro baseball career and traveled the country to see him play since MIke retired from U.S. Postal Service in the year 2009. Stanton also told about his father in his interview with Fox Sports,

“He wouldn’t let me pick up the balls. So he’d pick up every ball, and he’d use it as his workout holding the heavy bucket, pick up the balls, switch arms or whatever. He’d have me sit there and think about where I want to hit the ball or what to do different in the next round.”

Stanton attended Verdugo Hills High School in Tujunga, where he began playing baseball for the school.

Stanton played Tujunga Little League for the Verdugo Hills High School before transferring to Notre Dame High School in Sherman Oaks, California. He was a three-star athlete while he studied at Notre Dame, but chose baseball.

Stanton received golden offers from UNLV, USC, and UCLA to play football, but he accepted a scholarship of Tulane to play baseball. After being drafted in the second round of the 2007 amateur draft by the Florida Marlins, he denied going pro.

Stanton started his career for the Gulf Coast League Marlins. Shortly after that, Stanton played New York-Penn League for the Jamestown Jammers. After playing nine games for the Jammers, he batted .067 on 2 for 30 hitting.

Moreover, Stanton has received numerous post-season awards for his performance in the 2008 minor league season as well as listed as a No.16 on Baseball America’s top 100 prospects list. Stanton batted .311 with 21 homers, 52 RBI, and a 1.167 on-base plus slugging percentage in 52 games with the Jacksonville Suns.

On June 6, 2010, Florida Marlins drafted him in the major leagues and on June 8, Stanton made his debut in Rookie season. He also became the third youngest player in Marlins history at 20 years, 212 days. His first big league home run was a grand slam with Matt Graza.

Besides, Stanton also became the fourth player in the past 25 years to hit his first grand slam career and the second youngest player to collect five hits and four RBI in a game. He was entitled an outfielder on the 2010 Topps Major League Rookie All-Star Team.

On June 28, 2012, Stanton confirmed to play in the 2012 MLB All-Star Game and became the member of Home Run Derby. During his 2012: All-Star season, unfortunately, he left the game against the St. Louis Cardinals due to an injury in his knee.

However, the next day, Stanton had surgery of his knee and wasn’t able to play both of the events. After having a career-best .290 batting average, 37 home runs and .608 slugging percentage, he entered into the 2013 season and hit two long home runs in a June 17, 2013, victory.

On November 17, 2014, the Marlins signed a contract with Stanton for $325 million for 13 years, which is the most lucrative and largest contract in sports history.

Stanton went on a historic run, hitting 23 home runs in 35 games, including six games in a row during the 2017 season and became the first player since Chris Davis in 2013 to hit home runs in a season.

The 27-year-old, Giancarlo Stanton is an unmarried, and as per our research, Stanton is currently single. In the year 2015, he told in an interview with Ocean Drive.

“I definitely want a family. The future family, the future wife could be anywhere. You don’t necessarily go searching for it on all these match.coms and stuff, but she’ll come. I’m not worried about it,”

But, Stanton is quite popular on social media and has posted a few pictures of himself with different women on his Instagram. There were rumors that Stanton dated model, Sara Sampaio.

The professional baseball player Stanton has publically never came out with any girlfriend, and there are no any records of his affair and dating as well.

Stanton has earned a tremendous amount of money from his career. As of 2017, Stanton has an estimated net worth of $20 million and earns an average annual salary of $25 million. Stanton signed the richest deal in pro sports history with Marlins in November 2014.

The contract pays Stanton $325 million as part of 13 years contract, and he won’t be an unrestricted free agent until 2029. He is 6 feet 5 inches tall.