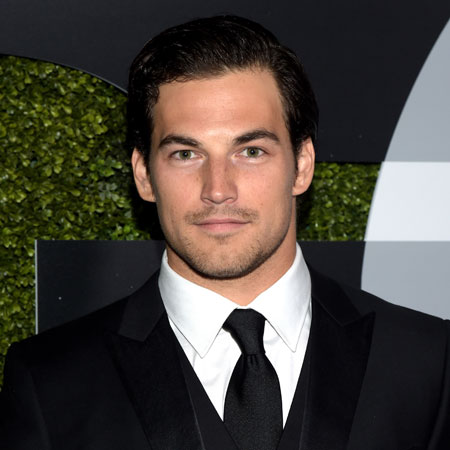 Italian-Canadian actor, Giacomo Gianniotti is best recognized for portraying characters in Reign and Murdoch Mysteries. He is a bilingual actor working in both Italian and English movies. As of now, he plays Dr. Andrew DeLuca on Grey's Anatomy.

Gianniott is engaged to his longtime girlfriend, Nichole Gustafson and is all set to start his family life. The couple announced their engagement on Thanksgiving day November 2017.

Giacomo Gianniotti was born as Giacomo Keaton Gianniotti on June 19, 1989, in Rome, Italy. He, at a young age immigrated with his family to Toronto, Ontario, Canada.

He studied at Cardinal Carter Academy for the Arts and graduated majoring in Theatre Program from Humber College. He also did an actor's residency at Norman Jewison's Canadian Film Center in Toronto.

Giacomo Gianniotti divided his time between Rome and Toronto working in stage films and television.He debuted in acting from a feature film shot in the Cinecitta film studio in Rome starring Shelley Winters and Vittorio Ga s sman.

In 2010, he guest starred in Medicina Generale, Italian television series. In 2013, Giacomo Gianniotti played in many series, Beauty & the Beast and Copper being two among others.

In the first season of Reign, he played the recurring character of Lord Julien. He also appeared in many episodes of Murdoch Mysteries as Leslie Garland. In 2014, Giacomo Gianniotti starred in Selfie which is now canceled. He then acted in the made-for-TV drama film The Secret Life of Marilyn Monroe.

After appearing in two episodes of Grey's Anatomy on its eleventh season. On 8 Jan 2016, Giacomo Gianniotti was made into a series' regular. His movie Edging and Acquainted, a drama is due to release soon.

Giacomo Gianniotti is one of the rising stars in the acting industry and till date, he has acc u mulated an estimated net worth of $800 thousand. However, it the official figure is not public. His value is sure to increase as he is now a regular in Grey's Anatomy.

According to sources, an average salary of the cast of Grey's Anatomy is in six figures. Ellen Pompeo makes $450,000 per episode.

On November 25, 2017, Giacomo Gianniotti got engaged to Nichole Gustafson, a makeup artist. They both announced via Instagram, where they have thousands of followers posting the same picture of them kissing on a white-railed balcony.

Gianniotti shared the picture with the caption,

'I am truly one lucky guy, and I wouldn’t rather be walking down this crazy road of life with anyone else.I love you. Thank you.'

While his fiancee posted the photo on her website Nichole G with the caption,

'Yesterday my best friend asked me to marry him in the most romantic way, a day reliving our love. We are thrilled. I wouldn’t want to do this life with anyone else. I love you baby and can’t wait to be your wife,' ending with an engagement ring emoji.