Gia Ruiz is an American art director and screenwriter. Among people, she is famous as the wife of actor-comedian-writer Danny McBride and the mother of their two children.

Gia Ruiz has been married for over a decade to her longtime partner, the American actor, comedian, and writer Danny McBride. Ruiz had known McBride for a long time, some reports even suggesting that they go as far back as 2002. According to the reports, they met at a Super Bowl party in Los Angeles and began dating soon thereafter. 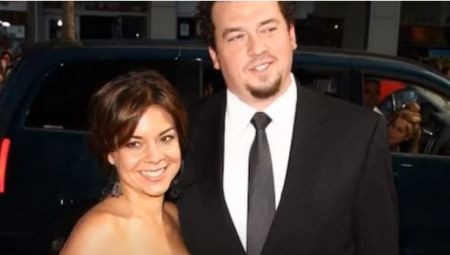 CAPTION: Gia Ruiz and her husband Danny McBride: The couple who married in 2010 is parents to two children SOURCE: YouTube @The Skeleton

The couple tied the knot after nine years of dating, on October 9, 2010, and have been together ever since. Their firstborn, son Declan George McBride, was born on September 26, 2011; followed by their daughter, Ava McBride, born in 2015.

Where Does Gia Ruiz Live?

Ruiz is currently listed as residing in Charleston, South Carolina. There is no doubt that the family of four are blissfully spending their life with her husband and their two children.

Who Is Her Husband Danny McBride?

Gia Ruiz is also part of the entertainment industry, not unlike her husband. But while Danny McBride is a force on-screen, Ruiz is more known for her work behind-the-scenes. Ruiz is an art director and a screenwriter.

She was an art director in the 2006 martial arts black comedy film The Foot Fist Way -- a movie that starred her now-husband Danny McBride alongside Ben Best, Jody Hill, Mary Jane Bostic, Spencer Moreno, and Collette Wolfe. Additionally, she was also in the art department of the HBO sports-comedy series Eastbound & Down as an art department a s sistant. The series was created and also starred her husband.

At the time of this writing, Gia Ruiz's net worth has not been revealed, however, the average salary of an art director is $101,297 and we can a s sume that she earns in a similar range. On the other hand, her spouse is believed to have a net worth of around $25 million, courtesy of his on-screen acting work, as well as his voice-over work, and his career as a comedian, writer, and producer.