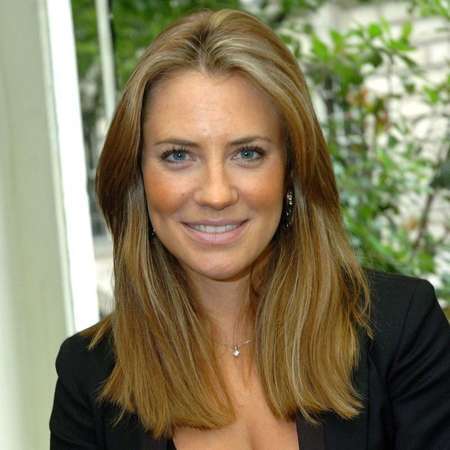 Georgie Thompson was born on 25th September in Harlow, Essex in England in 1977. She was born with a birth name Georgina jane Thompson. The Television Presenter was born to Phil Thompson. Thompson attended the Queenswood School with his fellow television presenter, Natalie Pinkham.

The beautiful presenter graduated from University of Leeds in 1999 in Broadcast Journalism. After graduating, Georgie worked as a Production scheme and a production assistant for GMTV. Thompson then went for Sky Sports in January 2001. She has covered many events for numerous networks and has been a part of Sky’s coverage of the Grand Prix Masters, Speedway World Cup, A1 Grand Prix, America’s Cup, 2011 Wimbledon Championships, Race of Champions and many more.

She was replaced as a co-host in Sky Sports F1 pit-lane reporter Natalie Pinkham and of F1 show by a close friend. Georgie worked as a panelist for Fox Sports on Regis Philbin’s sports talk show, Crowd Goes Wild. Later on, it was revealed that Thompson would be one of the new presenter on a Saturday morning comedy show, Fighting talk, along with Josh Widdicombe.

Georgie work also includes The Xtra Factor, The Wright Stuff, Sunday Brunch, 8 Out of Cats, Stephen Fry’s 100 Greatest Gadgets, Royal Wedding Day, A League of their Own, Live from Studio Five and The Football Years. Thompson is one of the recognized faces from Sky Sports presenters. Whenever we hear about the Sky Sports, Thompson is always one of the people who is remembered.

After she left Sky Sports, there were many rumors about her sudden quit from her job. Many said that she felt difficult because of the male world in F1 which she denied saying that it was just a lie and had enjoyed being there for one single year. She said that she left because she had some game plan in her mind and for her better future. Georgie accepted that it was the toughest decision in her career for which she took some time for herself to think that whether it’s the right decision for her or not. Today it seems like she doesn’t regret her decision and is happy with her life. His bio can be found on many sites including Wikipedia.

Talking about her personal life, Thompson had many affairs but she has been married to British sailor Sir Ben Ainslie. From January 2009 until April 2011, she dated Declan Donelly.Thompson got banned for 9 months in September 2011, for driving with excessive drinking habits more than twice.

Thompson is married to British sailor Sir Ben Ainslie On December 20, 2014. She first met with her husband in 2013. They announced their engagement in October. Their wedding took place at Hampton Court Palace. She seems happy with her husband and currently expecting their first child together to complete their family.

Being a TV presenter is not an easy job so it’s a necessity to be healthy, fit and in shape. She has a perfect body figure for which anybody would fall for. Georgie possesses a height of 5 feet 2 inches and a weight of 52 kg. It’s a fact that she has done many jobs in her career and has earned enough for her but her exact salary and net worth is unknown.