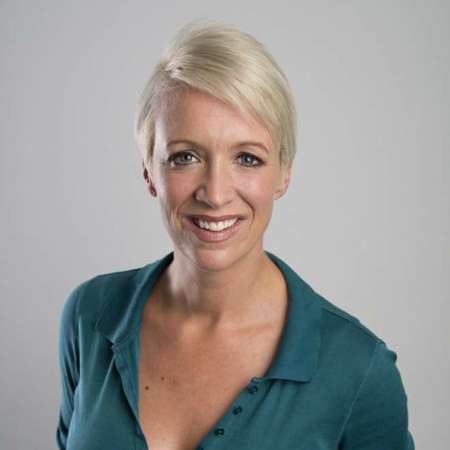 Georgie Bingham is a news and sports journalist and an English television presenter, best known for hosting Weekend Sports Breakfast on the talkSPORT. She is currently the presenter of ESPN and Sky News as well.

Georgie Bingham was born in 1976 in London. Her family background is not disclosed yet by any media nor by herself. She is racially white and British by nationality!

She attended Lee University and graduated with communication and cultural studies. After graduation, she began her career by serving as a runner for ESPN STAR Asia and Sky Sports.

She worked for radio like SGR Colchester, erstwhile Ipswich now Heart FM and BBC Radio Suffolk as well. From 2001 to 2004 she worked for ITV as the anchor of sports news called 'Over The Bar' alongside Kevin Piper.

After she worked for ITV for about three years she decided to resign and again returned to where she had worked previously at Sky UK Limited. Here she served as a newsreader for Sky Sports News and Sky News from 2004 to 2007.

During that period of time, Georgie also anchored a newspaper for the Fox Soccer channel in the United States of America.

In 2007, Georgie moved to the US and worked for ESPN (Entertainment and Sports Programming Network), a US-based global cable and satellite channel. Here she mainly hosts about sports show titled 'SportsCenter'.

During her stay at ESPN, she broadcast many sports events like Wimbledon, The Open, US Open Golf, Tennis, and much more. She even interviewed many sports personalities including David Beckham, Pele, Tracy McGrady, Kobe Bryant, Michael Phelps, and much more.

In 2009, she was the first British woman to host Premier League in America on ESPN.

In 2010, she came back to her native place the United Kingdom, and worked for talkSPORT, as a host for the show 'Weekend Sports Breakfast' in August 2013, with Micky Quinn. She joined the station in 2011 and she was an only female presenter, she formerly presents Sunday Exclusive, and Saturday and Sunday Scoreboards.

The talented sports journalist also hosted the Premier League Productions and is a sports host for ITV's Daybreak. After returning from the USA, she has also hosted IMG's 'At the Open Live' for the R&A and 'Golfing World' a weekly Sky Sports show.

She is also a regular on Channel 5 News. In August 2012, Georgie was the face of Channel 4's historic Paralympics coverage alongside Arthur Williams.

Georgie is stationed in London and Suffolk. She loves different sports like Cricket, Skiing, football, tennis, and formula one. She is a huge Ipswich Town fan, and supports the London Irish Rugby football club, and is also a NY Giants fan.

She also served as an ambassador of the Football Foundation, Inspire Suffolk, Helps for Heroes Celebrity Golf day and Stewart Golf Ltd. Georgie is also a recurring cast of “Andy Goldstein’s Sports Bar” on Talksport.

She is also the host for Talksport Radio, Premier League Productions, and Sky News, as a freelance presenter. In August 2012, she presents the Paralympics as part of the broadcast team of Channel 4.

Georgie Bingham's Net Worth And Salary

Georgie Bingham's net worth is expected to be $3 million at present. She has earned a huge amount of salary from her career.

Started her career as a runner for ESPN Star Asia and Sky Sports, she has worked as a newsreader for Sky Sports News and Sky News.

She participated in broadcasts from Wimbledon, The Open, the US Open golf and tennis, The ESPYs, during her time at ESPN, and interviewed Pelé, David Beckham, Tracy McGrady, Michael Phelps, and Kobe Bryant among others.

Not much is known about her private life, as she keeps away from media and her fans. Although, she is married once to James Joyce. However, in 2004, they got divorced when her husband became an alcoholic.

Rumors exist that she is dating someone in the industry, but the rumor was unfound, and lacks proof as we still do not know who her boyfriend is!

This fat bottom woman is approximately about 6 feet and about 75 kilograms in weight. Georgie's net worth and salary are not yet disclosed by any media or by herself. However, one can assume that she is earning a lot to live a luxurious life.

Her biography can also be obtained from wiki and IMDB as well. One can also follow her on Twitter, to get her day-to-day updates.

A little-known fact about her is that she rose to fame by modeling for Vogue in Ski-wear when she was just a child.