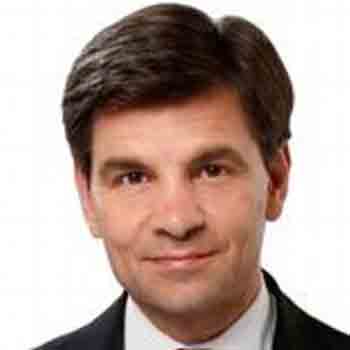 The reputed and adored, George Robert Stephanopoulos is an American television journalist and a former U.S. Democratic Party political advisor who rose to fame during the 1992 U.S. presidential campaign of Bill Clinton. George was a communications director for Clinton’s campaign.

George Stephanopoulos became the Communications director of White House and then a Senior Advisor for Policy and Strategy. George is successful in any field where he works; he is currently a chief anchor and chief political correspondent for ABC News, co-anchor of ABC News Good Morning America and host of ABC’s Sunday morning This Week. George is also a member of the Council on Foreign Relations.

Born on 10th February 1961 in Fall River, Ma s sachusetts, George’s horoscope and astrology say that his Sun is 21 degree 40 minutes in Aquarius and his moon is 16 degree 28 minutes in Sagittarius. According to Chinese Astrology, George is a Metal Rat.

George was born to parents Robert George ( a Greek Orthodox priest and Dean Emeritus of the Archdiocesan Cathedral of the Holy Trinity in New York City) and Nickolitsa "Nikki" Gloria(former director of the national news service of the Greek Orthodox Archdiocese of America).

George subsequently moved to the eastern suburbs of Cleveland, Ohio where he joined Orange High School in Pepper Pike. Later in 1982, George received a Bachelor of Arts degree in political science from Colombia University in New York.

While in the University, George was a sports broadcaster for WKCR-FM. George was also a salutatorian of his cla s s and was awarded a Harry S. Truman Scholarship. After that George took a job as an aide in Washington D.C. to Cleveland congressman Ed Feighan. George earned an M.A. in Theology at Balliol College.

Later George was moved to Senior Advisor on Policy and Strategy. George and Harold Ickes had a conference call with Roger Altman on February 25, 1994, regarding the Resolution Trust Corporation's choice of Republican lawyer Jay Stephens to head the Madison Guaranty investigation which consequently turned into the controversy.

Soon after Clinton was re-elected in 1996, George resigned from the Clinton administration. Soon after that George published his memoir, All Too Human: A Political Education (1999) which became a number one best seller on The New York Times Best Seller List.

George received an Honorary Doctor of Laws from St. John’s University in New York City in May 2007. When George interviewed President-elect Barack Obama The Week had a high rating and it beat Meet the Press.

On December 14, 2009, George began co-anchoring Good Morning America and shortly on January 10, 2010, he declared his last broadcast as the permanent host of The Week. In December 2011 it was announced that George would return as host of The Week. On August 2014, George became the Chief Anchor at ABC News.

George is currently the lead anchor for coverage of breaking news and major special events. He is the only chief anchor of a U.S. network news division not to anchor the evening newscast.

George has also appeared as himself in the first season of Spin City in an episode "An Affair to Remember". He also appeared in the Pawn Stars episode "Buy the Book”. George played himself in Netflix’s political drama, House of Cards in 2013.

George Stephanopoulos' Net Worth And Salary

George Stephanopoulos' net worth is $35 million at present. He is a successful man earning an annual salary of $15 million.

He became a household name as part of the campaign planning committee for Bill Clinton's successful presidential campaign in 1992. He served as press secretary for six months, but after making several mistakes, he was appointed to the position of Senior Advisor on Policy and Strategy.

In 2001, George married Alexandra Wentworth at the Archdiocesan Cathedral of the Holy Trinity on New York’s Upper East Side. Alexandra is an actress, comedian, and writer. The couple has two daughters named Elliott Anastasia and Harper Andrea.

The family currently resides in Manhattan. George is also a founding member of The Next Generation Initiative which is a leadership programmed intended at getting students involved in the public affair.