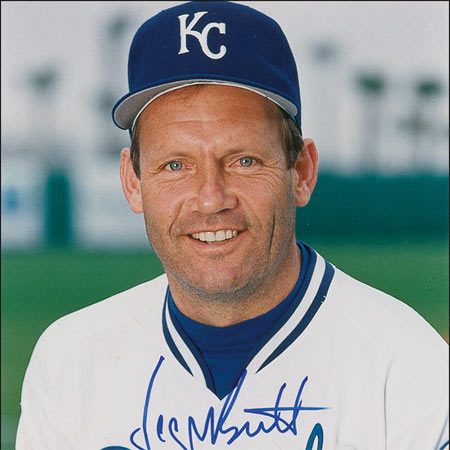 American retired third baseman and hitter in Major League Baseball (MLB) for Kansas City Royals, George Brett, is also the owner of various leagues and serves as a coach.

Besides his professional life, Brett is a married man and has three children.

George Brett was born George Howard Brett on 15th May 1953 in Glen Dale, West Virginia under the birth sign Taurus. Brett is American as per nationality and as far as his ethnicity is concerned, he is White.

Brett is the son of Ethel Brett Johnson and Jack Brett. He has three siblings - Ken ( a major league pitcher and John & Bobby (had a brief career in minor leagues). Later, George Brett and his mom moved to EL Segundo California.

George Brett, at the initial phase of his career, used to play in some minor leagues like Rookie-level Pioneer League, Cla s s A California League, and Cla s s AAA American Association. He appeared as a shortstop and later shifted to third base.

In 1973 Kansas City Royals promoted him to the major league. George Brett made his career’s highest 3154 hits that include 300 home runs and 3000 hits. Brett along with Hank Aaron, Willie Mays, and Stan Musical earned 300 batting average throughout their career.

In 1980, Brett debuted in World Series with his team. But the team lost the match against Philadelphia Phillies. After the 1993 season, George Brett retired from the team.

Soon after his retirement, George Brett became the vice-president of Kansas City Royals and also appeared as a part-time coach. By 1998, he became the owner of the Tri-City Dust Devils (a minor league baseball team), Rancho Cucamonga Quakes (minor team), and High Desert Mavericks (Minor team).

Some of Brett’s Awards include:

George Brett is a married man. Brett married Leslie Davenport in 1992. The couple together shares three children, Jackson, Dylan, and Robin. Brett named one of his sons on his father, Jackson.

The couple is still together without any buzz about their divorce and extramarital affairs.

Brett is an avid pet lover and involves in the campaigns of PETA (People for the Ethical Treatment of Animals). Through the campaign, he influences people to not leave their canine companions in their cars in the hot season.

George Brett, age 64, stands at the height of 6 feet (1.83m). The former player of Kansas City Royals has an impressive net worth of $15 million. He signed a contract with the team for $1.5 million.
George Brett also earns a good amount as a coach and from his minor league teams. As per some sources, an average salary of a baseball coach is between $10k to $82k. Brett has a private villa worth $3 million.