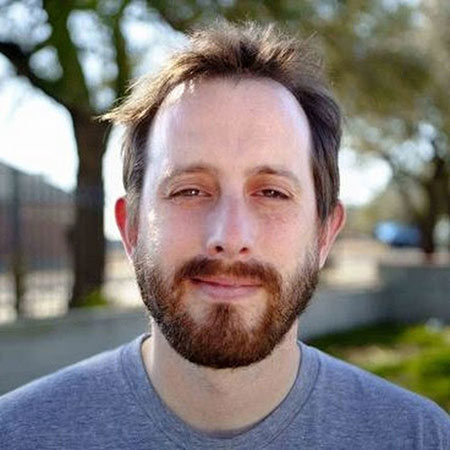 Geoffrey Lazer Ramsey, born on 19 June 1975, is an American Internet personality, comedian, and voice actor. His real name is Geoffrey Fink and is famous for lending his voice for Dexter Grif in the long-running web series 'Red vs. Blue'. He is also a co-founder of  a video gaming division named as 'Achievement Hunter'.

Geoff Ramsey attended his elementary and high school in Mobile, Alabama and later moved to Florida. He initially joined the United States Army after he was enlisted and went through basic training at Fort Jackson in South Carolina, before graduating high school . He served his country from 1993 till 1998 and later worked as a photojournalist in Kuwait.

Before working as a production assistant for View Askew Production, Geoff Ramsey worked as a roadie for the ska punk band 'Catch 22. Ramsey later got a job at TeleNetwork, a tech support company before he co-founded Rooster Teeth in 2003. Ramsey also co-created drunkgamers.com with Gus Sorola and his fellow co-worker at TeleNetwork Burnie Burns.

In 2008, Geoff Ramsey and his college friend Jack Pattillo started a video gaming website 'Achievement Hunter'. The website was first run by only the two colleague but it consists of 13 members currently. Ramsey also voiced Grif on the video game Halo 4 (2012).

As of September 2016, Geoff Ramsey's net worth is $3 million dollar and he is currently living with his family, his wife Griffon Ramsey, and their daughter Millicent "Millie" Ramsey in Austin, Texas.

While Geoff Ramsey was all set to change his surname to his "Ramsey", he was noticed by the court that it would not cost any more to change any other of his names. He changed his middle name to "Lazer," as a joke. He has a thick mustache and a tattoo all over his arms and hand. On 17, February 2011, a video of him watching the video game trailer for Dead Island was uploaded, where he strongly criticized the game developer Techland for making that horrible game.