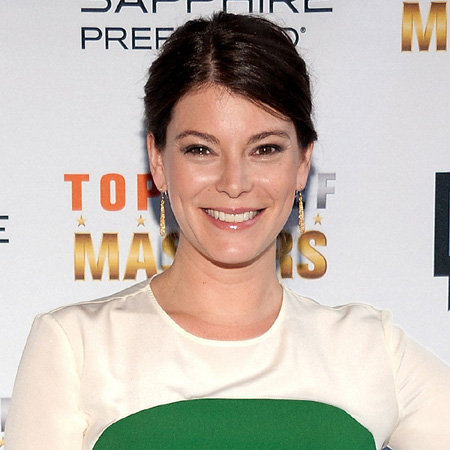 Gail Simmons, a Canadian food writer and cookbook author, is known for appearing in the Bravo’s reality series Top Chef. Currently, she appears in the season 12 of Top Chef alongside Tom Colicchio, Graham Elliot.

Gail Simmons was born on May 19, 1976, in Toronto, Canada. She is a Canadian trained culinary expert, food writer, cookbook author, and dynamic television personality.

Since the show’s inception in 2006, she has lent her extensive expertise as a permanent judge on BRAVO Emmy-winning series; Top Chef. Now entering its thirteenth successful season, Top Chef is rated the #1 food show on cable television.

After high school, Simmons went to McGill University in Montreal, where she majored in anthropology and Spanish and spent a post-graduate semester in Spain.

She began writing about food for the McGill Tribune during her last year in college, and then returned to Toronto after graduation to write for Toronto Life and National Post.

She then decided that she wanted a more in-depth culinary education, and in 1999, moved to New York City to attend culinary school at what is now the Institute of Culinary Education.

As part of her education at the ICE, Simmons trained in the kitchens of Le Cirque 2000 and Vong.

Gail was previously head critic on Top Chef Due and host of Top Chef Desserts, Bravo’s pastry-focused spin-off of the Top Chef franchise. She was also co-host of The Feed; which aired in 2014 on FYI, new lifestyle network.

In addition to her work on Top Chef, Gail makes frequent television appearances on NBC’s Today and ABC’s Good Morning America, among others. She has been featured in such publications as New York magazine, Travel + Leisure, GQ, People, the Los Angeles Times, and more.

She offers advice for anyone who is new to the food world and wants to break into the culinary limelight: you should love what you’re doing and you’ll manage to do it - no matter how hard it is.

The good taste necessary to be a food critic is not just something she was born with, but, as she explains, it is a natural balance that can easily be found through understanding flavor and a passion for learning.

She then landed a job as a research assistant at Vogue, under legendary food critic Jeffrey Steingarten, before moving on to a position as special events manager for Daniel NYC, Chef Daniel Boulud’s restaurant empire.

In 2004, Simmons returned to the magazine world as the special projects director at Food &Ramp; Wine magazine, working with marketing and editorial departments to put on special events like the Food & Ramp; Wine Classic in Aspen.

It was a fortuitous move. When Bravo later partnered with Food & Ramp; Wine for a new television show; Top Chef, Simmons was called in for a screen test.

She told a story of about her worst restaurant experience and nabbed a spot as a regular judge when the show first aired in 2006. In 2010, she began hosting a spinoff of the show, Top Chef: Just Desserts. Throughout her career, Simmons has made several TV appearances, including Today show, Good Morning America, and Fox and Friends.

And she has contributed to several cookbooks; It Must’ve Been Something I Ate Chef Daniel Boulud’s Cooking in New York City and The New American Chef. Her memoir, Talking with my Mouth, was fully published in February 2012.

The couple has a child.

She gave birth to her first child, a daughter named Dahlia Rae Abrams, on December 29, 2013. Her daughter Dahlia Rae was named after her favorite flower and in honor of her father’s late paternal aunt Rena who died 2 years prior to her birth.

Gail and Abrams have been happily married since 2008. She currently lives in New York City with her spouse, Jeremy and daughter Dahlia.

Gail Simmons' current net worth is $2.5 million. Her She earns hefty amount of money from her shows. She is five feet eight inch tall and has a perfect body measurement.

Philanthropy is important to Simmons, and she is an active supporter of Common Threads, a nonprofit organization that works to teach children how to cook healthy, inexpensive meals.

She also helped found of the Wine’s Grow for Good Campaign, which works to raise money to fund sustainable agriculture programs; and she sits on the boards of charities such as City Harvest, Hot Bread Kitchen, the American Institute of Wine and Food, the Institute of Culinary Education’s Alumni Committee, and the Women at NBCU Advisory Board.

Although a broad palate is necessary for her work, Simmons has her favorite and least favorite foods. She doesn’t eat black beans because they upset her stomach, or veal because she thinks it tastes bland, but she loves butterscotch pudding, ice cream, and dark chocolate. This cool, beautiful sexy TV-personality, writer (female), originating from Toronto, Ontario, Canada has a thin body, oval face type. She weighs 58kgs. Further information about Gail can be found out on a wiki.