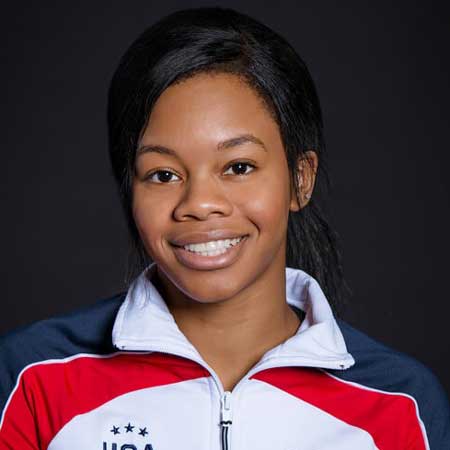 Gabby Douglas is an American artistic gymnast, best known as the first Afro- American who won the individual all-around event. She also won gold medals for the U.S. in the team competitions at the 2012 and 2016 Summer Olympics.

In 2012, Douglas became the fourth Gymnast in American history to be honored with the Associated Press’s award ‘Female Athlete of the Year.'  She won her first all-around gymnastics title at the Virginia State Championships when she was eight.

Gabby Douglas was born as Gabrielle Christina Victoria on December 31, 1995, in Newport News, Virginia. She belongs to the Afro-American ethnicity and holds an American nationality.  Douglas is the daughter of Timothy Douglas and Natalie Hawkins-Douglas. She has three older siblings - two sisters, Joyelle& Arielle, and a brother, John.

Douglas was interested in Gymnastics from a young age and had a flexible body which encouraged her parents to think about sending her for gymnastic training. She joined training when she was six after her elder sister pushed her parents to allow Gabby in the gymnastic classes.

Gabby Douglas made her national debut in 2008, at US Cla s sic in Texas where Douglas placed 10th place in all-around rankings. She went on to beat her opponent at the 2008 Visa Championships in Boston, Massachusetts.

Douglas grabbed the attention of the national team’s coordinator Martha Karolyi, who nicknamed her ‘Flying Squirrel’ due to Douglas’s excellent high-flying skills.

Selected For US Women's World Championship

Later in the Summer Olympics 2012, the gold was obtained by the US team of which Douglas was an integral part, but she returned empty-handed in most of the individual events.

Douglas was named to the Senior National Team for the first time since 2012 and earned an invite to the 2015 Worlds Selection Camp in September. On 8 October 2015, it declared that she had been selected as a member of the 2015 US Women's World Championship team.

Gabby Douglas has earned an enormous amount of salary from her career. Her current net worth is around $4 million. The Associated Press Female Athlete of the year receives a good amount from her endorsement deals with the companies like Kellogg and Nike.

Most recently, she signed a deal with Gillette Venus and will make between $1 million- $3 million from her deal with Kellogg's.

All the years Douglas’s been in the limelight, she has faced severe criticism due to the allegations of bleaching her skin to look fair, her hairstyle and her breast enhancement treatment along with her ‘unpatriotic’ behavior at international events.

However, Douglas has denied the accusations, but all these controversies had a toll on her emotional and psychological health.

Douglas, along with her mother, produced a film based on her life, for the Lifetime Channel. She was just 20 years old then.

Douglas has, in fact, maintained that she is motivated by the glamor world, and as a result, her reality TV show came into existence, the name ‘Douglas Family Gold.

There are no rumors about her having a boyfriend. She is single and doing in her career. She has not shared any information regarding her past relationship or boyfriend in the media yet.

She loves to keep her private life away from the media and it is the reason behind not sharing her relationship status in the media.