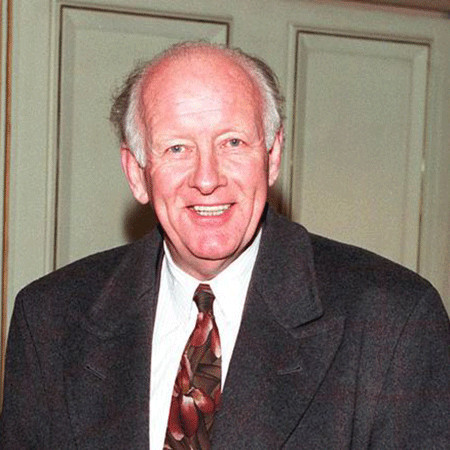 Frank Bough is a retired English presenter who is known best for his shows Grandstand, Nationwide and Breakfast Time. He is one of the renowned television personalities in British media. Frank’s career is highlighted for his service to BBC.

Frank Bough was born on 15th January 1933 in Fenton, Stoke-on-Trent, Staffordshire. He is a British citizen. Information on his parents is not available. Frank was very clever and smart. He went to Oswestry Boy’s High School and graduated from Merton College in Oxford. He served in Royal Tank Regiment and was in the football team of his university playing against Cambridge.

Frank Bough joined BBC as an anchorman and reporter for the show Home at Six which later became BBC Look North in 1963. From 1964-1968, he presented Sportsview. He became the regular presenter of the show BBC Sports Review of the Year in 1964 that he hosted for 18 years. He was also the host of the afternoon sports program called Grandstand for 15 years.

Frank Bough became the BBC’s football commentator for 1966 World Cup in England. He became the most familiar faces on British television throughout the 1970s after presenting the early magazine program Nationwide. His prominence increased in 1983 from the BBC’s breakfast television program Breakfast Time with Selina Scott and Nick Ross. He left the program at the end of 1987.

The actual net worth and salary of Frank Bough are not available in any media by any means but can be a s sumed to be very high.

Frank  Bough is a married man. He married Nesta Howells in 1959 just after leaving the army. Frank met his wife Nesta while he was in the army. The couple is blessed with three sons, David, Stephen, and Andrew. His wife Nesta stood by his side when Frank faced the scandals that ruined his career. Other than this, his personal life is a complete mystery.

Frank Bough got sacked by BBC in 1988 after his involvement in cocaine, visiting brothels and wearing lingerie at sex parties got leaked. He was a sensational television personality at that time and hence the news marred his entire career.

After the scandal and being ridiculed over and over again in the media, Frank Bough decided to appear as the guest on the program ‘Have I got news for you’. The appearance in the show helped Frank to face the shame and continue the broadcast career. Hence, Frank Bough served for LWT, ITV, Sky TV and London’s LBC radio before his retirement.

Frank Bough took the retirement from his career after being diagnosed with cancer. He then went through a liver transplant in 2001 and is living his retired life with his wife in Holyport, Berkshire.