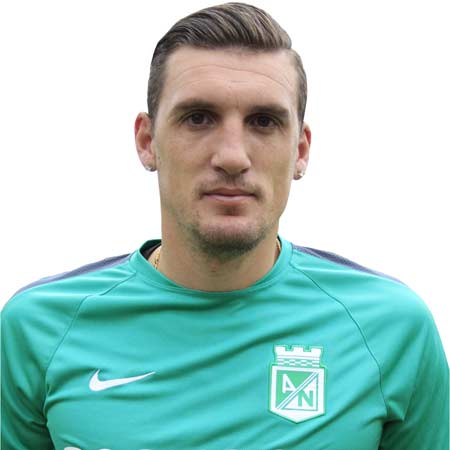 Started his career in 2006, from the Ferro Carril Oeste club, he has won many tournaments including Categoría Primera A, Copa Colombia, Superliga Colombiana, Copa Libertadores, and Recopa Sudamericana.

Early Life and Career of Armani

Franco Armani was born on October 16, 1986, in Casilda, Santa Fe, Argentina. He is Argentine by nationality and is of Argentines ethnicity.

Armani started his career in 2006, from the Ferro Carril Oeste club. He played for the club until 2008. He moved to club Deportivo Merlo in 2008 and left the club in 2010 for Medellin giants Atletico Nacional.

With Atletico Nacional, he stayed for 8 seasons and became their first choice goalkeeper. He was praised as an effective and reliable shot-stopper and was described as a hero to the Nacional fans.

Armani’s net worth can be over $2 million. His current market value is € 3.5 million.

Armani stands the height of 1.8 meters and weighs 85 kg. He is active on Instagram and shares many photos with his friends.

Armani is a married man but has no children yet. He married Daniela Rendon a Paisa model that captivates thousands of followers in the networks.

The couple first met in 2016, at a dinner and fell in love. He proposed to his girlfriend after few months of a relationship.

His wife, Daniela Rendón is a young law student who has dedicated her life to modeling. She stood out for her beauty and voluptuous body since her childhood days, however, she became known in Antioquia since she was Miss Sonrisa in 2006.

Armani has shared some pictures with his wife on Instagram. The couple seems happy as seen on their social networking sites.