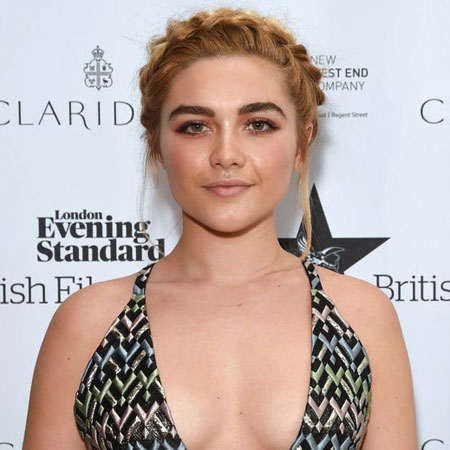 British Independent Film Award-winning British actress, Florence Pugh is well recognized for her role Katherine Lester in the movie, Lady Macbeth. Her contribution to the entertainment industry has won her many nominations for prestigious awards.

Pugh made her movie debut in 2014 from the mystery drama movie, The Falling. The following year, she made her TV debut from the TV film, Studio City. As of 2018, she worked as Gwen in The Commuter. She will also be seen in the movies like Fighting with My Family and Outlaw King.

Florence Pugh was born on 3rd January 1996 in Oxford, England under the birth sign Capricorn. Pugh is British as per nationality and ethnicity wise she's Caucasian. Her parents, Deborah Mackin (dancer) and Clinton Pugh (a restaurateur) raised her with her siblings, Arabella Gibbins, Rafaela Pugh and Toby Sebastian (actor).

During her childhood, she lived in Andalusia, Spain. She attended her first school in Sotogrande in Spain. At the age of 6, she displayed her interest in accents and comedy at Cokethoripe Juniors. She also played in several plays in Wychwood School and at St. Edward’s School, Oxford.

Her acting in the movie was highly appreciated by the fans and critics winning Evening Standard British Film Awards, Dublin Film Critics’ Circle Award and British Independent Film Awards for her role. She has been also nominated for several awards like European Film Awards and BAFTA Rising Star Awards.

As of 2018, Pugh worked in Jaume Collet-Serra’s movie, The Commuter. She will be portraying the role of Saraya ‘’Paige’’ Bevis in Fighting with My Family and Elizabeth de Burgh in Outlaw King.

Pugh made her TV debut in 2014 from the TV film, Studio City. In 2016, she worked in the TV series, Marcella with Anna Friel, Nicholas Pinnock, Ray Panthaki and Nina Sosanya among others.

Pugh will be portraying the role of Charlie in the upcoming TV series, The Little Drummer Girl.

Pugh is also involved in singing. She has a self-titled YouTube channel where she uploads cover songs. Her videos have thousands of views.

Florence Pugh has an estimated net worth of thousand dollars but the amount is still under review. Pugh worked in several movies that made a good collection at the box office:

Florence Pugh, the emerging actress, is more dedicated towards her career rather than being in any serious relationships.

She has never been spotted with any guys on a romantic date due to which she can be assumed to be single.

Pugh is very close to her family members. She loves to sing and play guitar and piano. She is also a travel freak and often travels to exotic destinations.

Pugh is not among those actresses, who has a perfectly toned physique, however, she is bold enough to flaunt her body. As of 2018, she was asked by a director to lose weight for a role but she confirmed that she is not going to do so.

Here is the video, where Florence Pugh talks about her movie, Lady Macbeth: