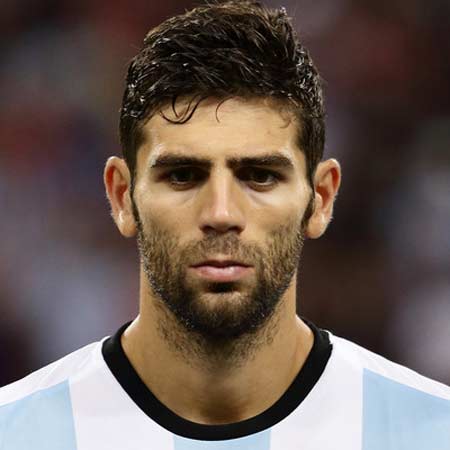 A.S. Roma central defender, Federico Julián Fazio started his career from the club Ferro Carril Oeste in 2005 and signed for Sevilla in 2007.

He made 201 official appearances for the latter club in nine years and scored 15 goals, joining Tottenham Hotspur in August 2014.

He debuted for Argentina in 2011 and is the part of the Argentine national squad at the 2018 World Cup.

Early Life and Career of Fazio

Federico Julián Fazio was born on March 17, 1987, in Buenos Aires, Argentina. An Argentine by nationality, he belongs to the mixed ethnic background.

Fazio debuted his career in 2005, from the Primera B Nacional club, Ferro Carril Oeste. He was purchased by Sevilla FC in late January 2007, where he spent the vast majority of the remaining season with reserves. Also, he helped the club achieve promotion to Segunda Division.

He scored his first goal for the club on May 7, 2008, in a 3-0 victory at Racing de Santander. Playing as a defensive midfielder, he grabbed a success in a 2-0 home victory against Real Betis in the game. He appeared in 19 games, 17 starts leading Sevilla to the fifth rank and qualified to the Europa League.

Fazio joined English side Tottenham Hotspur on August 26, 2014. He signed a four-year deal with the club for a fee of £8 million. He began on his Premier League debut at Manchester City but was given a straight red card for denying Sergio Aguero a goal-scoring opportunity in the penalty in a 1-4 defeat.

On 6 November he met the same fate, after conceding a penalty with a foul on Jerónimo Barrales in the closing stages of a 2–1 away victory over Asteras Tripoli F.C. for the Europa League group stage.

He returned to Sevilla on a five-month on January 31, 2016, after only one competitive game in the first part of the season (a 1–2 home loss against Arsenal in the League Cup).

Fazio was loaned to A.S. Roma on August 3, 2016, having the possibility of making the deal permanent at the end of the campaign for €3.2 million. He debuted for the club at Serie A on 20th August playing ten minutes in a 4-0 home victory against Udinese Calcio.

He was a part of the Argentine U20 team that won the FIFA World Cup in 2007. The following year, he helped the Olympic team win gold at the Summer Olympics held in Beijing. He played twice in the tournament, as a backup for Nicolás Pareja and Ezequiel Garay.

Fazio debuted for the full side on 1 June 2011, appearing in a 1–4 friendly defeat in Nigeria. He scored his first goal for his country in another exhibition game on 13 June 2017, netting the opener in an eventual 6–0 victory in Singapore. He was selected for the 2018 World Cup squad by manager Jorge Sampaoli.

Fazio’s net worth is over $2 million dollars at present. He earns $1.9 million (€1.7 million) playing for AS Roma as per the new contract.

His current market value is $12 million (£9 million) as per the sources by tranfermarket. He currently plays for Italian side A.S. Roma and Argentine national squad.

The 31-year-old footballer might be married, as he has not disclosed more details regarding his personal life. He is in a relationship with his girlfriend with whom he has shared many pictures on Instagram.

The couple has not updated their current relationship status to the public.