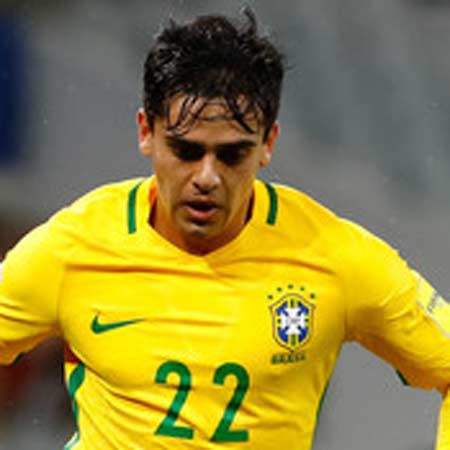 Fagner Conserva Lemos, a Brazilian professional, plays as a right back for the Brazil national team and Corinthians.

Fagner has represented the nation in the major leagues like South American Youth Championship and Copa América Centenario and has been selected in the 23-man squad for Russia 2018.

Early Life and Career of Fagner

Fagner Conserva Lemos was born on June 19, 1989, in São Paulo, Brazil. He is Brazilian by nationality and belongs to the White ethnicity.

Fagner made his career debut at the age of 17 from the Brazilian club Corinthians. He helped the club by trouncing the Fortaleza 4–0 in the away match.

Fagner moved to PSV Eindhoven in 2007. He was loaned to Vitória that year. He played for the club until 2008.

Fagner signed a four-year contract with German club VfL Wolfsburg on July 24, 2012. He returned to former club Vasco da Gama on loan until the end of 2013, after playing one season in the Budesliga with the club.

Fagner returned to Corinthians on loan from Wolfsburg in 2014. Corinthians acquired half of his economical rights and signed him exclusively at the starting of 2015.

Fagner was a member of the U20 team at the 2007 South American Youth Championship, which Brazil went on to win.

Fagner was called up by new Brazilian team coach Tite on August 22, 2016, to Qualification games against Ecuador and Colombia.

Fagner's Net Worth and Salary

Fagner’s net worth is over millions as per some online sources. His current market value is €5 million.

Fagner currently plays for Corinthians and the Brazilian national squad.

Fagner is unmarried and has no children yet. He is busy in his playing career and shares few things regarding his personal life.

Despite the popularity, Fagner has managed to keep his personal life low profile.