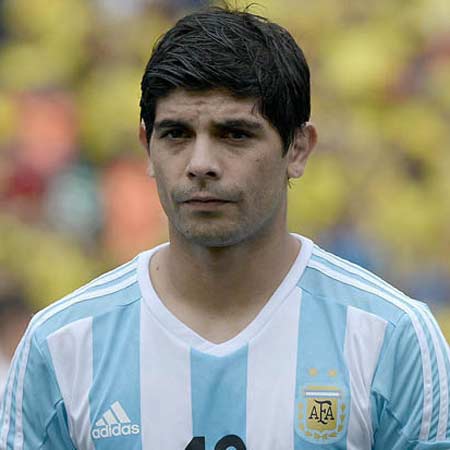 Started his career with Boca Juniors, he has appeared in 162 official games for Valencia winning the 2008 Copa Del Rey. He has been in included in the final squad for the 2018 World Cup.

Mostly known for his technical skills, dribbling ability, quick feet, vision and accurate passing, Banega is a midfielder who likes to mix it up a lot and can start by playing off the front man and drop deep to pick up the ball.

Early Life and Career of Banega

Éver Maximiliano David Banega was born on June 29, 1988, in Rosario, Argentina. He is the son of Daniel Banega. He has four brothers namely Emiliano Banega, Luciano Banega, Brian Banega, and Cesar Banega.

Banega came through the youth ranks at Boca Juniors in 2007. He was named as his successor despite his young age, after teammate midfielder Fernando Gago moved to Real Madrid in January 2007.

He made his professional debut against Club Atletico Banfield in a 4-0 victory on February 10, 2007.

He signed a five and half year deal with Spanish side Valencia CF for a fee of around €20 million. He debuted for the club on the 13th in a 0-1 loss at Atletico Madrid, coming as a half-time substitute.

Banega was loaned to Atletico Madrid for the 2008-09 season. He made his official debut as a substitute during the Colchoneros's 3–0 away win over PSV Eindhoven, in the first group stage match of the season's UEFA Champions League.

He played 28 matches in a 2010-11 season, as Valencia finished third and qualified to the Champions League. He was loaned to Newell's Old Boys in his country on January 31, 2014, until the end of the campaign.

Banega joined Sevilla on August 19, 2014, for an undisclosed fee, crediting his decision to move clubs to manager Unai Emery, who had managed him at Valencia. The transfer fee was reported to be $2.8 million as per the online sources.

He made his official debut for the club on 23rd August replacing Alex Vidal for the final 20 minutes of a 1-1 draw against Valencia. He played full 90 minutes in the Europa League final victory 3-1 against Liverpool.

Banega signed for Internazionale as a free agent in 2016. The announcement was made on May 16, 2016, with the move being effective on 1st July.

With the club, he made his Serie A debut on 21st August 2016, starting and playing 70 minutes in a 0–2 away loss against A.C. ChievoVerona.

In 2017, he scored his first hat-trick as a professional, in the 7-1 home thrashing of Atlanta BC that set a new league personal best at six goals.

As the Argentine U20 team, Banega played for the 2007 FIFA World Cup in Canada alongside Sergio Aguero in all seven game in an eventual tournament conquest. He has represented the nation in the 2015 Copa America starting in the team’s opening fixture against Paraguay in La Serena.

He was included in the final squad for the 2018 World Cup.

His current market value is $14.3 million, as per the online sources. He currently plays for club Sevilla FC and the Argentine national squad.