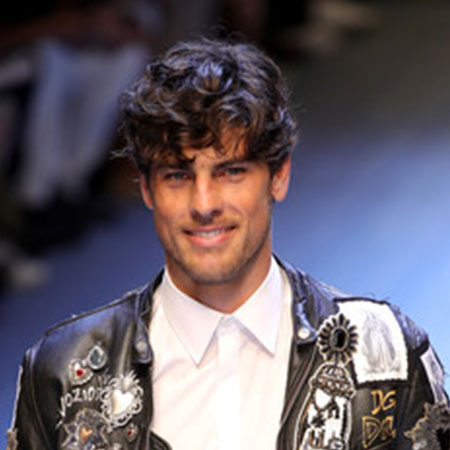 Brazilian model, Evandro Soldati grabbed the #7th position in the most successful male models in the world in 2008. After he became successful to grab the attention as a model, he started getting several work roles. He is popular as the representative model of Why Not Model Management, and Ford Models.

Evandro Soldati was born on 17th April 1985 in Ubá, Minas Gerais, Brazil, under the birth sign Aries. He grew up in a family of Italian heritage and belongs to mixed ethnicity. Further, there is no detail information regarding his parents, siblings, and his educational background.

Talking about his career, he entered his first modeling contest on his mother's advice at the age of seventeen. Then, Soldati modeled for several clothing lines such as Abercrombie & Fitch, Guess, and Dolce & Gabbana.

Once, in an interview with Globo Magazine, he shared how Soldati enjoyed modeling. There he said,

You get to travel the world, and it is always free. You get to know different places, and I have learned English and a bit of Italian as well.

In 2007, he appeared as a main male model in the Italian fashion designer, Giorgio Armani’s ads, and a year later for Italian luxury fashion house, Armani Jeans. Further, he made his presence in the Forbes magazine's 2008 list of the world's top ten male models.

Then, he took part in the 2010 Dolce & Gabbana European fashion week event. Later, he was also featured in a Lady Gaga’s music video, Alejandro.

Evandro Soldati is currently 33 years old. He might have a net worth in millions, but his exact net worth is still under the radar. Soldati undoubtedly earns a decent amount of money from his work deals with several magazines and brands.

Putting some lights on his personal life, Evandro Soldati married to his long term girlfriend turned wife, Yasmin Brunet, a Brazilian model as well as an actress who made her appearance in the 2008 Sports Illustrated Swimsuit Issue.

The couple dated for more than seven years before they exchanged their vows in July 2012. As of now, they don't have any children together.