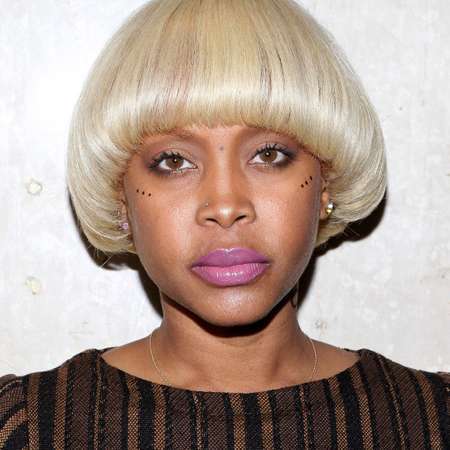 Erykah Badu was born to William Wright Jr. and Kollen Maria Wright in Dallas. Her brother, Eevin and her sister, Nayrok, after their father left the family in their early lives. Her paternal Grandmother used to look after the children while her mother was an actress in theatrical productions. Badu was very much impressed by her mother's profession so she took the first step towards her career at the age of four at the Dallas Theater Center where she danced and sang with her mother.

At the age of 14, she was in a local radio station. In her adult phase, she decided to change her first name from Erica to Erykah as she thought that her first name was a slave name. Erykah graduated from Booker T. Washington High School. She studied performing and visual arts. After that, she continued to study theater at Gambling State University which were established to provide higher level education to African American Community. Her pa s sion for music was over the top by that time so she left the university before graduating in 1993. To make her living she did many minimum wages jobs and taught drama and dance to children at the South Dallas Cultural Center.

During her tour with her cousin, Robert free Bradford, she recorded 19 songs demo, Country Cousins which was admired by Kedar Ma s senburg, a record producer and he set Erykah to record a duo with D'Angelo, Your Precious Love in 1994 and immediately signed her with Universal Records. Badu's career started with the duo recording with D'Angelo in 1994.

Her debut album, Baduizm was released on February 11, 1997 which includes three singles, On & On, Next Lifetime and Other side of the Game. It was a commercial success which debuted at no.2 on the Billboard charts and no. 1 on the US BillBoard top R&B/Hiphop Albums which helped her establish her strong image as Neo Soul leading Artists.

This album was certified with triple platinum by the Recording Industry Association of America and The British Phonographic Industry and Canadian Recording Industry Association certified gold. The lead single On & On was charted at no. 12 on the US BillBoard hot 100 charts and The UK Singles Charts and as well as charted in New Zealand charts which also gave her first nomination win at Grammy Awards where she won Best Female R&B Vocal Performance and her debut album won Bets R&B Album. Her first live album, Live, when she was pregnant with seven months, was released on Nov 18, 1997 which reached no. 4 and no.1 on the US BillBoard 200 and US BillBoard Top R&B/Hip-HOp Albums respectively which sold over 2 million copies.

The album was certified double platinum by RIAA. The lead single, Tyrone, was released in Oct, 1997 which was another hit. Badu collaborated with The Roots for Things Fall Apart in 1999. In 1999, Badu was featured in the song, You Got me by an American Female rapper, Eve and The Roots which peaked at no. 31 in UK and 39 in the US which made them win a Grammy Award for best Rap Performance by a Duo or Group. On October 31, 2000, she released her second studio album, Mama's Gun which includes three singles namely, Bag Lady, Didn't Cha Know? and Cleva.

Although the album was not charted high as her first two album but was certified Platinum by RIAA. One of the songs, Bag Lady topped the R&B charts for 7 weeks and got nominated for a Grammy Award. Badu collaborated with Soulquarian Common and released Love Of My Life for which she was awarded with her fourth Grammy Award. At that time, they were in a romantic relationship. In 2001, she was on Mama's Gun World Tour. Badu underwent writer's block, after she released Mama's Gun and Love Of My Life. On September 16, 2003, she released her third album, Worldwide Underground which includes three singles, Love of My Life, Danger and Back in the Day (Puff).

Her third album was also certified gold by RIAA. Love Of My Life charted at no. 9 and at no. 1 on The BillBoard Hot 100 and Hot R&B/Hip Hop songs chart. Danger was charted at no. 82 on hot 100 and no. 27 on the Hot R&B/hiphhop songs chart and Back in the Day peaked at no. 62. Badu recieved four Grammy Nominations for this album. In 2004, She had her Worlwide Underground Tour. To support independent artists career, Badu was a judge for the 4th Annual Independent Music Awards in 2005. Badu started Sugar Water Festival as an event to make people aware of health issues specially to African-American women.

In 2006, she relaunched the festival with comedian Mo'Nique hosting the show and kelly opening the show. In 2006, she did a concert tour, Summer Tour. Badu released her fourth album, New Amerykah Part One, on February 26, 2008 on her 37th Birthday. This album spawned two singles, Honey and Soldier. On November 2007, her single, Honey was leaked online. In Japan and Australia a bonus track, Real Thang, was released together with the album and a bonus track, Tumbling Dice Remix, to iTunes Store. The lead single, Honey peaked at no. 88 and no. 22 on many charts. It was the best opening week since Badu's debut album. It peaked at no. 2 on the BillBoard Top R&B/Hip-Hop Albums.

Again in 2008 and 2009, she had two world tour, The Vortex Tour and Jam Tour in support of this album. She released her fifth studio album, New Amerykah Part Two on March 30, 2010 with its lead single Window Seat which created a lot of controversy. This album charted in Top-50 in many countries. She promoted her album through many Magazines, television performances on Jimmy Kimmel Live!, Good Day New York and many more. Window Seat, the album's first single was filmed at the site where the President John F. Kennedy was a s sa s sined. The team didn't get any permission from the city. In the video, she walked nude at the site where Kennedy was a s sa s sined.

As the song ended, the shot rang out, she fell to the ground. She stripped infront of many families and childrens. This act created a lot of buzz and controversy for which she defended saying that she had no intention to insult the President and tripping act was all an accident. She has collaborated with many other artists for their video like with Flying Lotus, Supergroup Rocketjuice, Robert Glasper, etc. Eykah Badu performed at The Bomb Factory, her hometown in Dallas, Texas on Thursday, March 26, 2015. On Friday, February 26, 2016, she again performed at The Bomb Factory.

Badu released a free mixtape of her favourite recordings in July, 2015. Again she released a remix of Hotline Bling by Drake and again On November 7, 2015, she released a mixtape named But You Caint Use My Phone which debuted at no. 14 on BillBoard 200. Badu debuted in acting as a supporting role in the film, Blues Brothers 2000 in 1998. She again made appearances in The Cider House Rules in 1999 for which he got many awards including as a supporting actress at the Black Reel Award and was nominated for many.

She has played in other movies like House of D, Before the Music Dies and dave Chappelle's Block Party. She also appeared in music video of Miko Marks, Mama and Common's Video, The Light and also on the sitcom, Girlfriends.

In 2008, Erykah became the face of fashion designer, Tom Ford white Patchouli Fragrance and in December 2013, she was announced to be the face of Givenchy's 2014 Spring collection. Erykah with her hit albums has won many awards and has been nominated for many awards. In 1997, Erykah won three awards ( Favorite Female Solo Album, Best R&B/Soul or rap song of the year and Favorite Female Solo Single)out of six nominations.

Badu became an activist in South Dallas. She set up her own charity named Beautiful Love Inncorporated Non - Profit Development (B.L.I.N.D.) which was established in 1997. Badu renovated and reopened the Black Forest  Theatre in South Dallas which brings people together to celebrate art and culture of the place. Many famous artists like Snopp Dog, Dead Prez and many other volunteered their time to help out the charity. In 2003, she traveled to Africa to work with  children suffering from AIDS and poverty.

Erykah Badu, with her hit albums and acting  has earned a lot in her life, currently her net worth is $12 Million which means she earns good amount of salary. Her height is 152 cm and her exact weight is not available right now. Her bio is on many sites including wiki.