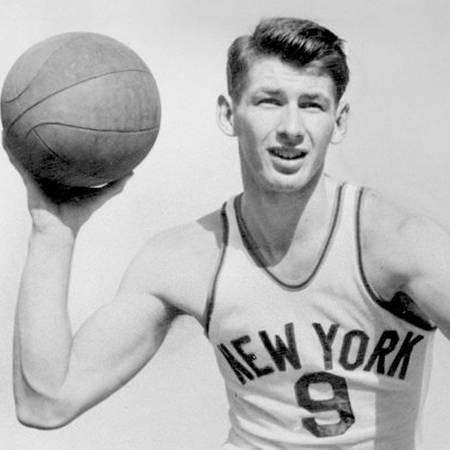 Ernest Maurice ‘Ernie’ Vandeweghe Jr. was born on 12th September 1928 in Montreal, Quebec where he spent his youth playing football, basketball, baseball. He later moved to New York with his family.

Ernie attended Oceanside High School located in Oceanside, Long Island, New York where he pursued his interest for football, basketball and baseball. Ernie was the member of the Omega Gamma Delta Fraternity while in Oceanside. Later however, Ernie showed enthusiasm in basketball and joined and played for Colgate University in 1945. In 1949 Ernie announced that he was ready to be selected in the 1949 NDA draft. He was selected by the New York Knicks in the 3rd round of the 1949 NBA Draft. He then began playing his pro career as a Guard/ Small forward with the New York Knicks. He played six season with the Knicks till 1956 . He played numerous games with the knocks and finally retired form the NBA in 1956. Ernie ten began serving as a physician for the Air Force which makes him different from the other basketball players. He was stationed overseas in Germany. Not only that, Ernie also served in Physical Fitness and Sports as a chairman of the President’s Council. He worked under President Gerald Ford on the Olympic Sports Commission where he a s sisted with development of the 2 key pieces of sports legislation named Title IX and the 1976 Amateur Athletic Act. Ernie was also the senior vice president with Focus Partners LLC which is a New York based financial services firm. He was also a consultant with the United States Golf and Fitness Association all of which kept him occupied even after retiring from NBA. Ernie also sporadically delivered commentary for various sports publications.

Ernie married Miss America 1952, Colleen Kay Hutchins with whom he had four children. His eldest son, Kiki Vandeweghe is a well known NBA All-Star and later also became a New Jersey Nets coach. Tauna was a swimmer who won the U.S. national swimming championship in the backstroke and also competed in the 1976 Summer Olympics. Bruk Vandeweghe won a medal ion beach volleyball in the 1994 Goodwill Games where as his youngest daughter Heather Shannon was the captain of the U.S. national women’s polo team and was also a physician.Ernie is the grandfather of Coco Vandeweghe who is a world renowned tennis professional.

Erie was 86 years old when he died. He weighed around 88 kgs and was 6 feet 3 inches tall. He died on 8th November 2014 due to natural illness in Newport Beach. Ernie was named Consensus second team All-American in 1949. Ernie is highly respected and recognized for his service in basketball arena as well for the Air Force. During his NBA career, Ernie went on to average a total of 9.5 points, 4.6 rebounds and 2.4 a s sists per game.