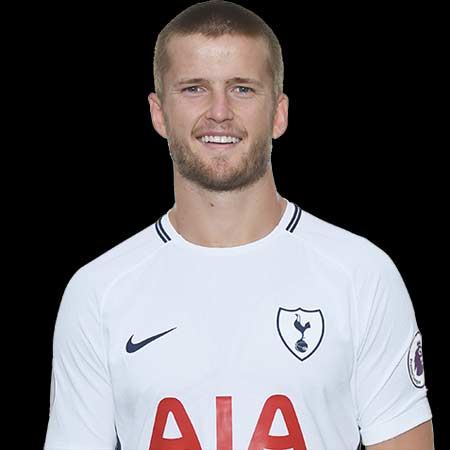 Eric Dier is an English professional footballer currently playing for Premier League club, Tottenham Hotspur, and the England national team. He is best known as a versatile defensive player who played as a defensive midfielder, a center back and a right back. He started playing for the Tottenham since 2014 and till now he attended 181 games out of which he scored 8 goals.

Dier started his international football career in 2011 in England under-18 match against Slovakia. He has been enlisted in the 23 man England national team squad for the FIFA 2018 World Cup.

Eric Dier was born Eric Jeremy Edgar Dier on January 15, 1994, in Cheltenham, England to Jeremy Dier and Louise Dier. His father is a former tennis player and mother served in the hospitality sector in football clubs. He is the grandson of Ted Croker who is a former secretary of The Football Association and president of Cheltenham Town.

At the age of seven, he moved to Portugal with his parents. He was raised in Algarve region along with his five siblings before moving to Lisbon. In 2010, Dier parents returned back to England but he remained in Portugal to ensure his football career and joined  Sporting CP's academy.

Dier started playing football at the age of eight after his  P.E. teacher Miguel Silva referred him to Sporting's scouts. In April 2010, he signed professional terms with Sporting. He joined Everton football club in January 2011 for five months on loan.

He represented Everton U18s for 10 times during his loan spell and eventually won the 2010–11 U18 Premier League with the team. In early 2011, he extended his loan for additional 12 months with Everton academy.

Eric Dier made his debut with  Sporting B in a 2012–13 Segunda Liga in August 2012. On November he scored his first senior goal in a 3–1 away win in the Segunda Liga. The same month he was called to play for the first team in a Primeira Liga against Braga. He scored his first goal for Sporting's first squad in a 2–2 league against Moreirense.

Dier signed a five-year contract with Tottenham Hotspur in August 2014 in a £4 million transfer. He made his club debut on the first day of the 2014–15 Premier League season against West Ham United and scored the only goal of the match. After eight days, Tottenham Hotspur 4-0 win against newly promoted Queens Park Rangers but lost the  2015 League Cup Final to Chelsea.

On September 2015, Dier signed a new contract with Tottenham for five years. He scored Tottenham's first goal of the Premier League season in a 2-2 draw home match against Stroke City.  On 26 September he scored the team's equalizing goal in 4-1 away win against Manchester United.

Dier again signed a new five-year contract on September 2016 to last until 2021. He made his UEFA Champions League debut in a 2–1 loss against AS Monaco FC. He captained the team for the first time in a 2–1 loss to Liverpool at EFL Cup. On April 2017, he scored his first goal of 2016–17 in a 2–0 win against Burnley in the Premier League.

Eric Dier was approached by the  Portuguese Football Federation to play for Portugal once he turned 18. He earned his first England call-up in November 2011 for the under-18 match against Slovakia. In May 2013, he was named in the 21-man squad for the 2013 FIFA U-20 World Cup and made his debut on 16 June in a 3–0 win in a warm-up match against Uruguay.

On August 2013, Dier made his debut for the England under-21s  in a 6–0 win against Scotland. On November 2015, he was selected for the first time to the England senior team. He scored his first international goal in a 3–2 victory against Germany. Dier also played in UEFA Euro 2016.

Dier captained the England team for the first time in November 2017 in a friendly match against Germany. He was selected in the 23-man England national team squad for the 2018 FIFA World Cup which will be held in Russia.

In 2014, he signed a five-year contract with Tottenham for $5.3 million (£4 million). Dier endorses the brands like Umbro, Nike from where he has accumulated a good sum of amount.

Eric Dier shares a romantic relationship with his longtime girlfriend, Maria Hansen. The duo was first spotted together at 2016 Euro Championship which attracted many attentions.

The couple is open about their love life and didn't hesitate to express their love in public. They often made public appearances together. As per some online sources the duo is together for a quite long time.

Dier is quite active on social sites, he has more than 622k+followers on Instagram and 270k+followers on Twitter. He is best known for his gaming style, and his fine free-kick taking technique never fails to impress the audiences. He is a huge fan of  Roy Keane and Rafael Márquez, who have inspired his playing style.

In 2011, when he was involved in England national team kit promotion for sportswear manufacturers, Umbro, his appearances aroused many questions because none of the team members knew him before.

Check out the exceptional football skill of Eric Dier.