Best known for his appearance in the television series Law & Order: Criminal Intent, Eric Bogosian was born and raised in Massachusetts. The multidisciplinary artist has his hands in every possible field as he is an actor, playwright, novelist, historian, and monologuist. Similarly, he produced six off-broadway solos which gained him three Obie Awards. Apart from his incredible acting career, he has written four books. Bogosian is also a founder of dance series at The Kitchen.

Eric Bogosian was born on 24 April 1953 in Woburn, Massachusetts. He is a son of Henry Bogosian, an accountant, and Edwina Bogosian, a hairdresser and instructor. His star sign is Taurus which defines his personality to be sensual and ambitious.

For college, Bogosian attended the University of Chicago. He graduated from the Oberlin College, Ohio. Later he moved to New York City to pursue a career in the theatre.

Eric Bogosian rose to fame from his popular play Talk Radio, which was nominated for Pulitzer Prize. Following the success, he wrote another play named SubUrbia which was premiered in 1994.

Bogosian has written and performed his six major solos which were produced off-broadway. His first two solos; Men Inside and fun House made it to the New York Shakespeare Festival. His other solos include Drinking in America, Wake Up and Smell the Coffee, Pounding Nails in the Floor With My Forehead, and Sex, Drug, Rock & Roll. 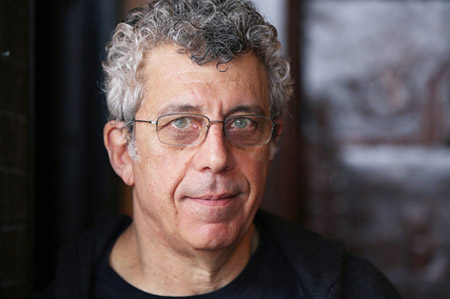 From his solos, the talented actor and author Bogosian won three Obie Awards and a Drama Desk Award.

Other than that, the playwright wrote Griller, Humpty Dumpty, Red Angel, and 1+1. In 2005, he appeared on the off-broadway play The Last Days of Judas Iscariot. Then after in 2009, he appeared on the play Time Stands Still, directed by Danial Sullivan.

The multi-talented personality Bogosian is an acclaimed author. So far, he has published three books; Mall, Wasted Beauty, and Perforated Heart. All of his novels were published by Simon & Schuster. In 2015, he wrote a book about the history of American Genocide, Operation Nemesis: The Secret Plot that Avenged the Armenian Genocide.

Apart from his books, all of his artworks; plays and solos are available in print. The Theatre Communication Group, a non-profit organization published all of Bogosian's works. His popular works Talk Radio, subUrbia, and Sex, Drug, Rock & Roll were adopted to movies.

The actor is a founder of the dancer series at the non-profit, multidisciplinary arts organization The Kitchen located in Manhattan, New York City. The organization is a wonderful platform to the local emerging artist.

In 2004, Bogosian was awarded the Guggenheim Fellowship award. He was also honored with two fellowships awards by The National Endowment for the Arts.

Eric Bogosian is a multidisciplinary personality of the Hollywood art world. The talented actor and author Bogosian has had a decorative career for over the three decades now. From his successful professional career, he accumulated an attractive net worth of $6 million.

Being a professional actor Bogosian is keeping his private life behind the closed doors. However, the gentelman is enjoying a blissful married life with wife Bonney for nearly three decades now.