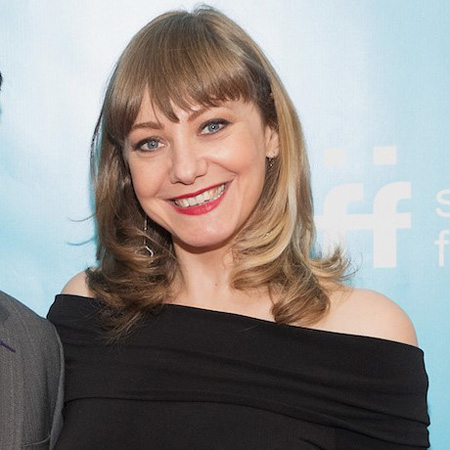 Emily V. Gordon is an American producer, writer and podcast host most known for co-writing the comedy movie, The Big Sick. She wrote the book along with her husband, Kumail Nanjiani. The book explains their relationship status. Furthermore, Gordon also came up the live show, The Meltdown with Jonah and Kumail.

Emily V. Gordon was born on May 3, 1979, in North Carolina, USA. As far as her ethnicity is concerned, she belongs to White  American and holds the American nationality. She was brought up in North Carolina along with her parents.

From the year 2004, the talented producer started her career as a practicing therapist in North Carolina. Until 2009, she continued her practice for several years. Afterwards, she moved to Brooklyn, New York.  By the time she moved to New York, she entirely left the field of therapy and then pursued her career as a writer.

Additionally, she contributed to the Bust magazine, AOL, xoJane, The Daily Beast, The Atlantic, GQ, The FW, Rookie, Hello Giggles, Lenny, and  Dame magazine. She also wrote a book named SuperYou: Release Your Inner Superhero, a tongue in cheek self-improvement guide which was released in 2015.

Moreover, Gordon has written two web series, ExploreD and Power Up at Disney.com and wrote for the second season of the Carmichael Show aired on NBC. She produced The Big Sick along with her husband, Kumail Nanjiani. The movie was about their relationship and where Nanjiani played herself on screen and Gordon was played by Zoe Kazan. The film was directed by, Michael Showalter and was produced by Judd Apatow. Apart from writing, Gordon also produces comedy shows.

In the year 2010, she created a weekly live show, The Meltdown with Kumail and Jonah along with her husband, Kumail Nanjiani and Jonah Ray. With the request of Chris Hardwick, she also worked as a program director into a curated comedy venue.

From the year 2011 to 2012 Gordon served as a program director of the Nerdist Showroom at Meltdown Comics.

The proficient producer was married to a famous comedian and actor, Kumail Nanjiani in 2007. The couple saw each other for a year and got married after dating each other for about a year.

Eight months after the couple met, Gordon was ill. She suffered from a severe illness, and she posted about her illness on a Facebook page for Common Variable Immune Deficiency (CVID) awareness.

Emily V. Gordon is living a luxurious life along with her husband in New York. Her net worth is reported to be around $1 million.