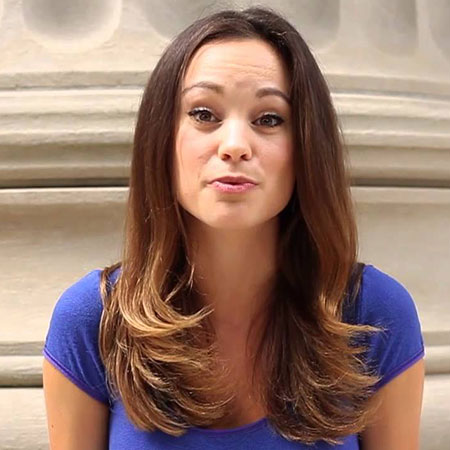 Emily Dawn Calandrelli is an American TV host who is famous for hosting Xploration Outer Space in the Fox Xploration Station. Emily is a talented woman and won numerous academic awards during her early age. Not only she works as a host, but she has also written a book called Ada Lace to introduce youth to science and technology.

Emily Dawn Calandrelli was born in Morgantown, West Virginia, the United States on May 18, 1987. She was born under the zodiac sign Taurus which predicts his traits to be patient and loyal.

Emily holds an American nationality and belongs to the White American ethnicity. She grew up in West Virginia and attended West Virginia University. While she was a student, she won numerous academic awards.

In 2009, Emily was named to the USA Today all-academic team, won the Barry M. Goldwater Scholarship and was voted as Ms. Mountaineer. Emily completed her education from West Virginia University with a B.S. degree in Mechanical Engineering and Aerospace Engineering in 2010.

After graduation from the University of West Virginal University Virginia, she started working in Washington D.C. for the US Representative, Alan B. Mollohan.

Professionally, she is a professional speaker who speaks on the topics of space exploration, scientific literacy, and equality of the sexes in STEM (science, technology, engineering, and mathematics).

In 2014, she started hosting Xploration Outer Space in the Fox Xploration Station for the educational block. In 2017, she made several appearances on Netflix episodes of Bill Nye Saves the World.

Today is the day! The 5th (and final) Ada Lace book has been released!

I am so very proud of this series. We set out to bring a complex, STEM-loving girl into the world and Ada was born.

Thanks to all who have supported this series. Go get book 5 at Barnes and Noble or Amazon! pic.twitter.com/P4VYYrfSX5

Besides, she contributes as a writer at TechCrunch.  Emily has also written the Ada Lace series of chapter books. Her books introduce youth to science and technology.

Emily is an award-winning host and TV show presenter who is associated with Fox Xploration Station and is believed to have a net worth in thousands of dollars. She has produced a show named Nye Saves the World which helped her increasing her fortune. Though her exact income is not revealed yet, we believe she earns an impressive salary from her multi-dimensioned career.

In celebration of Earth Day tomorrow, I've partnered with @toyotausa to learn more about their zero-emission cars. The Toyota Mirai is a Hydrogen powered car, which uses a Fuel Cell to generate electricity for the car’s electric motor. The inputs for the Fuel Cell are simply Hydrogen - from a fueling station - and Oxygen – from the air. There are two outputs: Electricity - for the electric motor - and H20 – which is released out the tailpipe. #ToyotaMirai #ToyotaPartner

According to PayScale, the average salary of a TV host is about $55,294. Their salaries generally range from $28k to $123k. She recently brought a Toyota Mirai which generally cost about $60,000.

Emily Calandrelli is currently aged 31 and is a married woman. She got married to her long-time boyfriend Tommy Franklin. They tied the knot in August 2017. She announced her marriage through her Instagram where she shared a picture showing the couple hugging each other while they shared a kiss.

This weekend was the best few days of our lives. We can't thank everyone enough for being a part of our little love story. We are on cloud nine and can't stop talking about how great every single one of you are. How did we get so lucky to have friends and family like you? And a huge thanks to this hunk of man for becoming my HUSBAND! Tommy Franklin you are my fairytale. : @cobermicus #TomilyEverAfter

They live a happy married life as of now. She often shares the blissful moments through her social media. They have even gone to a different country for their vacation.

Calandrelli first met her husband during their NASA  internship at Ames Research Center in California in 2008. Sometimes after they met, they began dating each other. They dated for almost 8 years before they decided to take their relationship to the next level. They got engaged in September 2016 at Golden Gate Bridge and got married a year later.

In the below-shown video, Emily Calandrelli’s shares her experiences in TED talk.