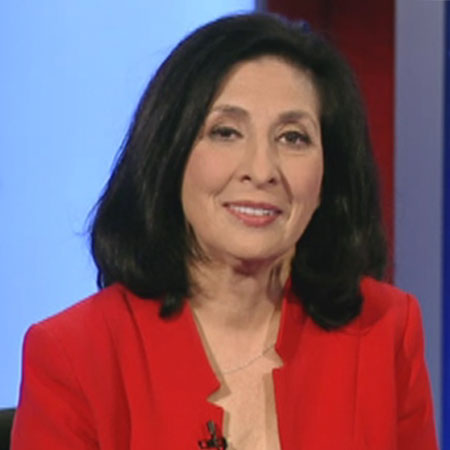 Ellen Ratner is an American news analyst for The Fox News Channel. She is also known for her appearance on The Long and Short of it, and The Strategy Room.

Ratner was born in Ohio, Cleveland on 20th June 1950. She grew up with her two brothers; Bruce Ratner who is now a Nyc based developer and Michael Ratner who was a human rights attorney.

Ratner went to Goddard College in Cleveland, and she later completed her Masters in Education from Havard University.

Ellen Ratner is the Washington bureau chief and the political editor for Talkers Magazine which she also manages.  Her coverage of White House for Talk Media News is heard on more than 400 radio stations across the U.S.

Ellen Ratner used to work in the field of Mental Health from 1971 to 1976. She worked as the director Psychiatric Day Treatment program at South Shore Mental center in Quincy, Massachusetts. Later she served as the Vice President of Research, Development, and service at the ARC and also as a Director of its Research Foundation.

Ratner has helped to upgrade the concept of "radio rows" as per her capacity, the first radio row was held at the White House in the year of 1993.

. Ellen Ratner is also the author of various books like She has also  'Ready, Set, Talk! A Guide to Getting Your Message Heard By Millions on Talk Radio' that came out in the year 2006,  'The Other Side Of the Family: A Book for Recovery from Abuse, Incest, and Neglect' which was published in the year 1990.

Ellen Ratner is married to Cholene Espinoza, a reporter previously based in Iraq.

They both met each other sharing the same career as a journalist in 2002.  He was the Air Force U-2 spy plane pilot and is currently a commercial pilot of United Airlines. Ellen Ratner and Cholene Espinoza got married after dating for quite a while.

Ellen Ratner's net worth is $1 million, most likely or in double-digit millions as she holds respectable positions like the Washington Bureau Chief for Talkers magazine, political analyst and a journalist for Fox News and has written more than ten books till date. Exact figures of her salary and net worth haven't been made public.