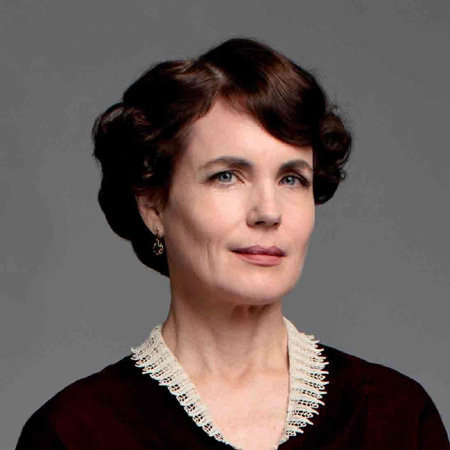 An American film, television and theatre actress as well as a musician Elizabeth Lee McGovern is an Academy Award, Emmy Award and Golden Globe Award nominee for her performances in the 1981 movie Ragtime as Evelyn Nesbit and British Drama Series Downtown Abbey as Cora, Countess of Grantham respectively.

Her grandfather was adventurer William Montgomery McGovern. She has a younger sister named Cammie McGovern who is a novelist. McGovern has the Scottish, English and more distant German ancestry.

When her father accepted the teaching position at the law school at UCLA, the family moved to Los Angeles. She studied at the American Conservatory Theater in San Francisco and then at The Julliard School in New York City.

While she was studying in the Julliard School she got a role of the girlfriend of a troubled teenager Conrad Jarrett, a character of the movie Ordinary People in 1980.

Elizabeth McGovern had appeared in an episode of the television series California Fever in 1979 as Lisa Bannister. It was her first movie. After completing her acting education, she began to appear in the Off-Broadway, making her way to the infamous theatres.

However, she managed her time to act in the movies as well. Following so, she got a role in 1981 movie Ragtime as Evelyn Nesbit that nominated her in the Academy Award for Best Supporting Actress. This proved her acting skills and opened the door to more of the projects and roles in movies, television as well as in theatres.

She has performed in many of the theatre acts in New York, USA and well as in London. Some of them to name are Ophelia in Hamlet with the Roundabout Theatre Company at the Criterion Centre Stage Right, April 1992, The Hitch-Hiker, Three Sisters (Chekov), As You Like It, Beth in Dinner with Friends (Donald Margulies) at the Hampstead Theatre, June 2001, Judith Brown in Complicit by Joe Sutton in the Old Vic, 2009, etc.

She has been thus awarded Will Award by the Shakespeare Theatre Company in 2013. Besides being an actress, she is also a singer-songwriter. She is fronting the band “Sadie and the Hotheads” at the Castle pub venue in London since 2008.

Elizabeth McGovern's net worth is $4 million at present. She has earned a huge amount of salary from her career.

She has a good fame in her profession and has a good net worth and salary pay. McGovern has a big fan base since she made her mark in acting. She is beautiful and also has the stunning performance on screen.

She has appeared in several of the movies and her upcoming movies are The Woman in Gold and Unexpected. The movies are being filmed. She can still be seen in the drama series Downtown Abbey.

Elizabeth McGovern stands a very good height of 5 feet and nine inches tall with the accompanying body weight. She has a maintained body posture. She looks stunning in any kind of outfit she fits in.

Moving on to her personal life, she is a married woman. She is married to Simon Curtis. He is a producer by profession. They got married on 12 December 1922. The couple is blessed with two children. The name of the children has not been revealed.

The family is living happily and there has been no sign of disputes in the family which concludes no possibilities of divorce in recent future. Prior to her marriage, she was in relation to Timothy Hutton and Sean Penn. To learn more on her, her fans can read her biography in the Wikipedia, IMDb, and many other internet sites.