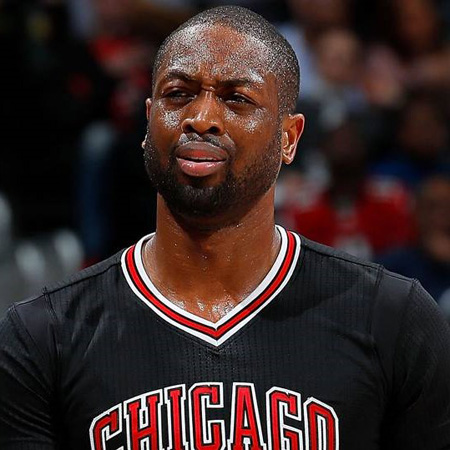 Dwyane Wade is an American basketball player, plays for the Chicago Bulls of NBA (National Basketball Association). After getting drafted in 2003, & being named in the All*Rookie team in the very first season; Wade began his professional career playing with Miami Heat.

Wade is born to Jolinda and Dwyane Wade Sr who got separate when he was just four months. He has a very estranged childhood & his neighborhood was more of a crime ghetto than a habitable place.

Dwyane Wade began played football & basketball since his young age. He joined the Marquette University in 2000, where he led the team to their first Final Four appearance in 25 years.

Wade’s low ACT scores halted him for playing the most part during his first year at university in 2000. However, he wasn’t away from the game & advised his team on scoring and defenses.

When Wade realized his errors in ignoring academics, Wade worked further hard in studies as well as scored good marks in class; making his direction to play for his team in the second year.

Wade bid his farewell with Marquette as NBA draft awaited him & Miami Heat got him in the first round itself as the fifth pick.

It was a magnificent feat coming from a rookie player & Heat set their hopes high on this youngster. By the end of the season, Wade was named one of the members of the NBA All-Rookie first team.

Dwyane Wade married twice in his life. He first married his high school sweetheart, Siohvaughn Funches in 2002. The former couple, has two sons, Zaire and Zion.

However, the marriage doesn’t last long & they filed a divorce in 2007 which was an official announcement in 2010. And wade got the custody of his sons.

Wade began dating, American actress, the Gabrielle Union in 2009 and they got married in 2014. He has a son, Xavier Zechariah from another girl he dated, Aja Metoyer. Wade is also involved in philanthropy work & founded ‘The Wade’s World Foundation’ in 2003.

Dwyane Wade has earned well over $200 million in his career, However after living expenses and paying agents, managers. His net worth is likely significantly less than that.

Estimates of his net worth are between $95 million & $115 million and Wade has millions more coming in future years.