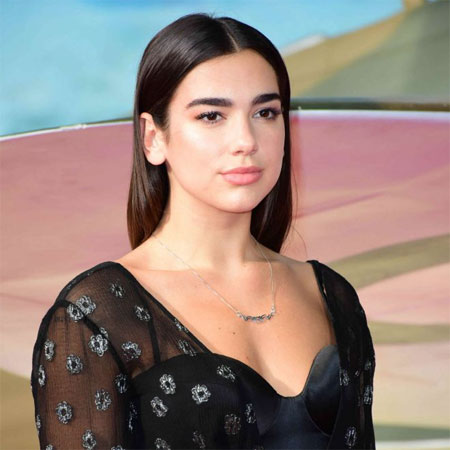 The English pop singer, songwriter, and model, Dua Lipa is world-renowned for her excellence in music and exceptional voice quality. She took the music industry by storm after her three singles ‘New Love,’ ‘Be The One,’ and ‘New Rules'  became viral on the internet. The first time when Lipa covered her favorite songs by other artists on YouYube, she was 14 years old.

Born on August 22, 1995, in London, United Kingdom, Dua Lipa is the daughter of singer, Anesa Lipa and Dukagjin Lipa. She has a brother named Gjin and a sister named Rina who are a dancer and Instagram personality respectively.

Regarding her nationality, Lipa is a British and ethnicity wise, Lina is of mixed ethnical background as her parents are Albanian immigrated from Pristina in the 1990s. She attended Sylvia Young Theatre School and then moved to Kosovo with her family in 2008.

As a child, Lipa used to listen to her father’s record collections and was influenced by artist like P!nk and Nelly Furtado.

Dua Lipa began posting covers of her favorite songs on YouTube by artist P!nk and Nelly Furtado, at the tender age of 14. After a year, she moved back to London with aspirations to establish her name in the music industry.

In the year 2015, Lipa began working on her album for Warner Music Group. She released her first album ‘New Love,’ in August 2015. The song was produced by Emile Haynie and Andrew Wyatt.

In October 2015, Lipa gained tremendous popularity, after releasing her second single ‘Be the One’ which went viral and achieved success throughout Europe, peaking at no. 1 in Belgium, Poland, and Slovakia. The song also charted within the top ten in over 11 European territories.

Furthermore, Lipa appeared as one of the cast on the performances on the BBC Sound of…2016 long list. Releasing her third single ‘Last Dance,’ on February 18, 2016, she again launched her single ‘Hotter than Hell,’ on 6 May.

‘Hotter than Hell’ became a hit worldwide and peaked at number 15 on the UK Singles Chart while reaching the top twenty in Australia, Netherlands, and Belgium. Her fifth overall single ‘Blow Your Mind (Mwah)’ was released on 26 August.

‘Blow Your Mind (Mwah)’ became her most successful single of the year, peaking at number 72 on US Billboard Hot 100 for the first time. The song also topped the Billboard Dance Club Songs chart as well as peaked at no. 23 on the Billboard Mainstream Top 40 chart.

On June 2, 2017, Lipa released her self-titled debut studio album and its sixth single ‘New Rules,' became her first no.1 single in the UK.

The English hip-hop singer and songwriter, Dua Lipa, 22, is not married yet. Lipa is currently dating her boyfriend Paul Klein who is Frontman and lead vocalist of the synthpop trio, LANY. The couple first met at the British Summertime gigs in London’s Hyde Park earlier in 2017, and since then they have been dating.

The couple was also spotted together in several party, adventures and music programs. Lipa previously was in a relationship with a model-turned-actor, Isaac Carew. The couple dated for about 18 months from late 2015 to early 2017.

Liva was later linked to EDM artist, Martin Garrix for a few months. They also made a song together called ‘Scared To Be Lonely.’ Furthermore, they both attended the BRIT Awards in May. However, they sat on separate tables. She also loves traveling.

Besides, Liva is an Instagram personality with whooping 4.9 million followers, as of 2017.

With her powerful presence and talent of writing and singing, Dua Lipa has garnered a tremendous amount of money from her career. As of 2017, the singer and songwriter Lipa, has an estimated net worth of $3 million, according to Celebrity Net Worth.

Lipa has given some hit songs to the music industry like ‘Hotter than Hell,’ ‘Blow Your Mind (Mwah),’ which also became her first official entry on the US Billboard Hot 100, peaking at number 72. One of her most successful song ‘New Rules,’ became her first no.1 in the United Kingdom.

The song also received over 698 million views and a Platinum certification by the Recorded Music NZ for sales of 30K copies. Moreover, she has self-titled YouTube channel where she has 3,403,454 subscribers as of 2017.

Lipa earns an annual average of $820.9K to $13.1 million from her youtube channel reportedly. Moreover, Lipa rides Ducati 959 Panigale motorbike that costs around $1.5 million. She stands at the height of 5 feet 6 inches.