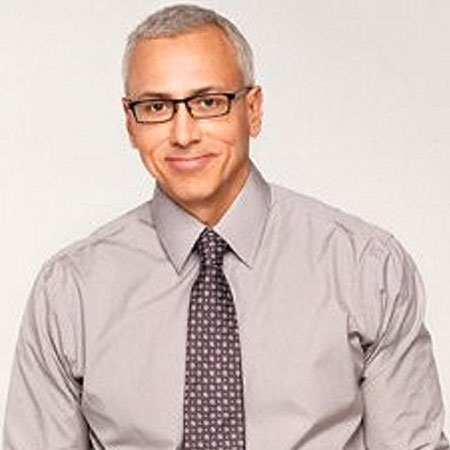 Drew Pinsky was born on 4th of September, 1958 in Pasadena, California, United States of America.  He was born to his father Morton Pinsky and mother Helene Stanton. Drew’s father, Morton, was a physician and his mother, Helene, is a singer and an actress.

Drew Pinsky attended Polytechnic School for his primary education.He graduated from Amherst College in 1980 with a major in Biology and earned his M. D. at the University of Southern Carolina School of Medicine in 1984.

Drew Pinsky started his career appearing in a segment of a Sunday night KROQ-FM show hosted by Jim “Poorman” Trenton and “Swedish” Egil Aalvik. The segment was called “Ask the Surgeon”.  And, the segment soon combined with “Loveline”, another Sunday night segment, into a show of its own, co-hosted by Trenton and Drew. The exposure on TV and radio made Drew Pinsky the “Gen-X answer to Dr. Ruth Westheimer, with an AIDS-era, pro-safe-sex message.”

Drew Pinsky began another nationally syndicated talk radio show called Dr. Drew Live on November 27, 2007.  He focused on a wider range of health issues on the show. The show originated from KGIL in Los Angeles and was canceled in December 2008.  He launched a new weekday program, “Dr. Drew Midday Live with Mike Catherwood” on KABC in Los Angeles on 5th of January, 2015. Later, he announced that Loveline would wrap up on 28th of April, 2016.

In 1984, Drew Pinsky first appeared on TV as a contestant on Wheel of Fortune, though he did not win it. Moreover, Drew Pinsky also served as health and human relations expert on the first season of the U.S. TV series Big Brother in 2000.

Drew Pinsky married Susan Pinsky on 21st of July, 1991. He and his wife Susan live together in Pasadena, California at present. The couple has three children.They have a daughter, Paulina Marie Pinsky and two sons, Douglas Drew Pinsky and Jordan Davidson Pinsky.

Drew Pinsky goes running and does weight training regularly. Besides his profession, he enjoys traveling and singing. His father died suddenly of a cerebral hemorrhage on 27th of October, 2009. Drew Pinsky had suffered from prostate cancer but recovered after surgery in 2013.

Height and Net worth

Drew Pinsky stands tall and smart with a height of six feet. He has a fit body and charismatic personality. His net worth is estimated to be $20 million accumulated from his hard work. His salary must be high. Drew Pinsky is a nonobservant Jew.