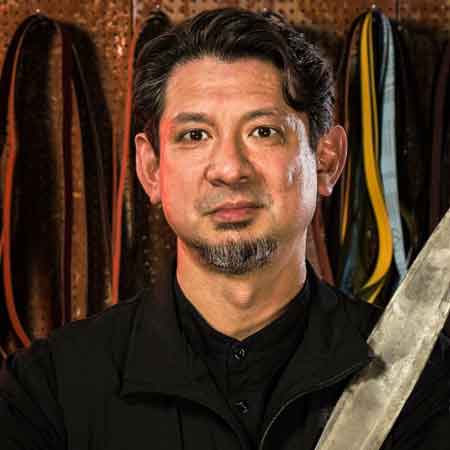 Doug Marcaida is the man with incredible fighting skills who is famous as a Filpino martial artist who has been active for over 25 years. From hand-to-hand combat to battlefield strategy, he is known as "a walking encyclopedia in the evolution of weapons of war". He is also a judge of the famous show, Forged in Fire. In addition, Marcaida is a weapon specialist who designs the world's deadliest blades.

Dough Marcaida is a secretive man. The information about his birth date, childhood, education, and family are not available. But it is known that he came from the Philippines.

Doug Marcaida came to limelight after he appeared on the show Forged in Fire, a popular show which is produced by OutPost Entertainment which tests some of the best hands in the field alongside J. Neilson and David Baker.

The show was premiered on the 22 June 2015 and as of 2018, it is in the fifth season. In each episode, four bladesmiths battle in a three-round elimination contest to forging bladed weapons, with the overall winner receiving $10,000 and the day's championship title. As a judge on the show, Marcaida represented the end users of the weapons.

Besides being a judge on the show, he is an edged weapon combat expert who designs some of the world's dangerous blades. He designed for FOX Knives which is in Itlay. He also has a website where he advertises his work.

Marcaida is one of the makers of DART (Direct Action Response Theory) Karambit,  a tiny curved knife that fits in the hand and the DART XT. Some of his tools are used in the movies like 300, Blade and Bourne series.

Check out what is Doug Marcaida up to as of 2020 in the video given below:

Moreover, he is also a skilled martial artist who also studied fighting techniques and styles around the world. As of 2018, he is busy teaching Marcaida kali in Romania and runs three martial arts in New York.

Talking about Marcaida's net worth there is no doubt he receives a handsome salary from the show and also from selling the designer blades but his net worth and salary are under review.

Moreover, he also teaches martial arts and the average salary for a martial arts instructor is $35,000 per annum.

Marcaida is a very secretive person when it comes to his personal life. As he has not shared any information about being married or having a wife we can assume that he is single at present.

As of August 2018, he is on leave for a few months because of an arm surgery. However, the main reason for the injury is not known yet.

Thank you 511 tactical for outfitting my Man Cave closet to keep me in the "always Ready" Mindset with 5.11 Tactical Apparel and gear you catch me wearing on the show. And can you believe they have them in Black or very very dark grey ? #511tactical #alwaysbeready #leggobatman #ionly workinblackorveryverydarkgrey. #forgedinfire #historychannel

Talking about his online presence Marcaida is active on Facebook and Instagram where he mostly shares pictures of his knife designs and works. He stands the height of 5 feet 8 inches tall.

Here is the video of Doug Marcaida.