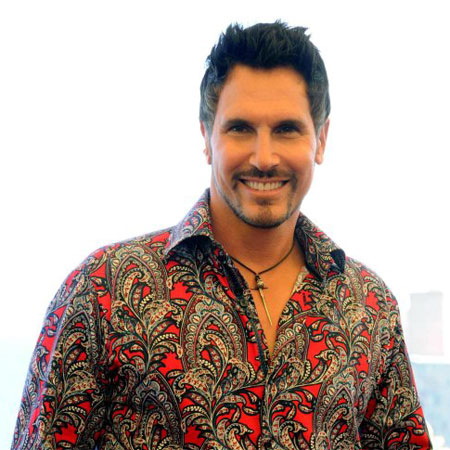 Don Diamont is an American actor known best for his role in the movies The Young and the Restless as Brad Carlton and in The Bold and the Beautiful as Bill Spencer, Jr. He has been active in the industry since 1984 till date.

Don was the first daytime actor to have received the 50 most beautiful people in the world by People Magazine in 1990. Don Diamont was born on December 31, 1962, as Donald Fienberg in New York City, New York.

Childhood and Education Of Don Diamont

Don Diamont was born in New York to parents Judy Diamont and Albert Feinberg but was raised in Los Angeles. He has 3 siblings, 2 sisters and a brother, named Bette, Elena, and Jack. His sister Bette died in 1998 while his brother Jack died in 1989 due to cancer. He is the youngest in the family. Don is American by nationality and has white ethnicity.

A late FBF photo from 78/79 with my beloved maternal grandparents, Alexander and Lena. My brother, sisters, and I called them Nanny and Poppy. Poppy was a character with a big personality. He was a master diamond cutter who cleaved the famous Earth Star Diamond, and appeared on the Mike Douglas Show to display it to the country. He was also a tremendous athlete as an AAU gymnast who was elected to the Gymnastics Hall of Fame. Even at 80 he was incredibly fit. @zanderdiamont is his namesake. Didn’t really think about it at the time, but Alexander ( I don’t call him Zander) had a lot to live up to. He’s doing a pretty good job so far.

He attended the school in Los Angeles and used to play in his school teams. He is very interested in cycling and basketball since his school days.

With the height of 6 feet and 1 inch, amazingly hunky body features, and good looks, it was not hard for Don Diamont to start out his career as a model. He chose his mother's maiden name in his professional journey to make it catchier among the people and turned to Don Diamont from Donald Feinberg. He continued to model and one day he was offered to work on the TV screen.

Don Diamont's first major acting break came in 1984 to work on Days of Our Lives as Carlo Forenza. He remained in the show for a year. After a year, he was on the cast of The Young and the Restless as an opportunistic businessman Brad Carlton.

Don's fame came along with this show and he remained in the show till 1996 and again rejoined in 1998 till the character got killed off the show in 2009. His noticeable and accredited acting can be seen in the CBS daytime drama The Bold and Beautiful as Bill Spencer, Jr. Don can be seen in different television shows and series as a guest star including Baywatch.

Don Diamont has four children with his ex-wife named Lauren born in 1988, Sasha born in 1991, Alex born in 1995, and Luca born in 2000. However, things did not go well afterward and they decided to separate. In 2001, they filed for divorce as well as custody of their kids and were finalized in 2002. Don won the custody of his children.

Meantime Don Diamont had met with actress Cindy Ambuehl and they started dating soon after Don's divorce. Don and Cindy dated for eight years and got married in 2012 at Eze, France on a tourist spot. The couple is living happily together and is blessed with twins, sons. There is no sign of misunderstanding or issues between this couple so far.

Prior to these two relationships, he had a romantic affair with Gloria Loring for a short stint, back in 1985.

The exact net worth and salary of Don Diamont are not known. He is believed to earn a very handsome amount of salary. However, his net worth is estimated differently from different sources. His estimated net worth is reported to be $10 million from one source while others estimate it to be $4 million.