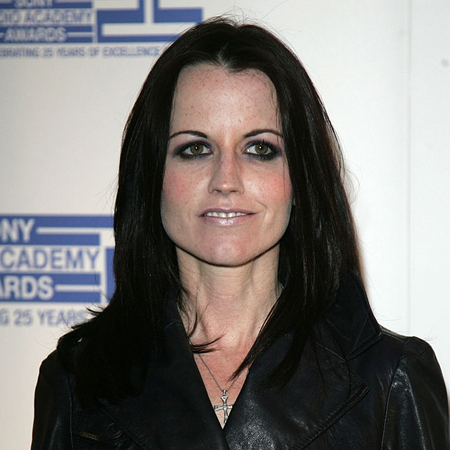 Irish singer-songwriter as well as a musician, Dolores O' Riordan was well-known as the lead singer and band member of The Cranberries for thirteen years before the band broke in 2003. However, in 2009 the band again reunited.

In the early 90s, O'Riordan started her career and earned huge popularity with the hit numbers, Ode To Family, When You're Gone, Zombie, and Linger. She was also known as a style icon, sporting a pixie cut or buzzed hair.

Dolores O'Riordan was born Dolores Mary Eileen O'Riordan on September 6, 1971, in Ballybricken, County Limerick, Ireland. She is Irish and belongs to Caucasian ethnicity.

O'Riordan was raised in a Roman Catholic family and her mother was a devout Catholic who chose her daughters' name in reference to the Lady of the Seven Dolours.

O'Riordan was the youngest of nine children of her parents, Eileen O' Riordan and Terence. Her mother was a school teacher and father was a farm laborer who was left unable to work after an accident.

O'Riordian studied at Laurel Hill Colaiste FCJ School based in Limerick. She was also an Honorary Parton of University Philosophical.

In the 1990s, Dolores O'Riordan began her music career with Cranberry Saw Us (currently known as The Cranberries) as band’s lead singer, replacing singer Niall Quinn.

The Cranberries released their debut album, Everybody Else Is Doing it, So Why Can’t We? in March 1993. The album earned a huge success and peaked at #1 in Ireland and the United Kingdom.

The Cranberries have released five albums till date, Everybody Else is Doing It, No Need to Argue,  So Why Can't We?, To the Faithful Departed, Bury the Hatchet, and Wake Up and Smell the Coffee. It has sold more than 40 million records worldwide.

In January 2009, O'Riordan's and her Cranberries members were invited to the University Philosophical Society for a concert to celebrate her appointment as an honorary member of the Society. The concert influenced them to consider their reunion tour and recording session.

In August 2009, she announced the reunion of her band, Cranberries for a world tour while promoting her solo album, No Baggage on 101.9 RXP radio. The tour started in mid-November of 2009 which ended in March 2010.

On 9 June 2010, The Cranberries worked at the Special Olympics opening ceremony at the Thurmond Park in Limerick. This was the first time the band had performed in their native city in over 15 years.

The same year O'Riordan worked with the American composer, Angelo Badalamenti, on the soundtrack of Evilenko. In the movie, she provided vocals on several tracks such as "Angels Go to Heaven", and to the movie's theme song.

In 2005, O'Riordan appeared as the guest vocalist on the German electronic music, Jam & Spoon's album, DiplomaticFairytales 3003's song Mirror lover. She also made her appearance in the Adam Sandler comedy, Click, in a cameo role.

In February 2007, O'Riordan released her first single, "Ordinary Day", and debuted her album, Are You Listening? on 4 May 2007 at the Republic of Ireland, 7 May in Europe, and 15 May in North America.

On 19th November 2007, O'Riordan canceled the remainder of her European Tour of Luxembourg, Warsaw, and Prague due to illness. She also worked in American clubs, including Des Moines and Nashville. O'Riordan launched her second album, No Baggage in August 2009.

In April 2014, she recorded a new song with JETLAG in a collaboration with Andy Rourke and Ole Koretsky. Later, the trio formed a band, D.A.R.K and released their first album, Science Agrees, in September 2016.

In 1998, the former couple lived in Kilmallock, County Limerick, but later they moved to Howth, County Dublin. They used to spend their summers in a log cabin in Buckhorn, Ontario, Canada.

But in 2009, O'Riordan along with her family shifts to Buckhorn on a permanent basis. In August 2013, she again returned to Ireland. O'Riordan and Burton ended their 20 years long relationship in late 2014, citing some irreconcilable differences.

Later she found her love in Olé Koretsky, the New York-based record producer who also worked with her on a music collaboration, D.A.R.K. The duo first encountered one another during the formation of D.A.R.K in early 2015 and eventually fell in love.

Koretsky posted an emotional tribute on D.A.R.K. website where he wrote,

"My friend, partner, and the love of my life is gone. My heart is broken and it is beyond repair,”

Being raised in a Catholic family, she admired Pope John Paul II whom she met twice consecutively in 2001 and 2002. In 2013, she performed at the Vatican's annual Christmas concert on the invitation of Pope Francis.

O'Riordan was arrested in November 2014 for air raging on an Aer Lingus flight from New York to Shannon. The charges against O'Riordan was for her verbal and physically abusive behavior to crew members.

As soon as O'Riordan landed, she was arrested but she resisted and started shouting, "I'm the Queen of Limerick! I'm an icon!”. She also reminded them her taxes value and head-butted one officer and spat at another.

Later, O'Riordan organized a press conference where she stated, she was stressed from living in New York's hotels and she was disturbed by her marriage failure. Later, her case reached in court but a judge agreed to dismiss her all charges in a condition if she apologized in writing to those she injured and paid €6,000 to the court poor box.

In May 2017, O'Riordan publically discussed her bipolar disorder and confessed that she was going through diagnosis since 2015. The same year, her Cranberries members cited her back problem as the reason for canceling the second part of the group's European tour.

In Late 2017, O'Riordan said, she was recovering and soon performed at private events.

Dolores O'Riordan died at the age of 46 on January 15, 2018, while recording a session in London. Her death was considered unexpected at the London Hilton in Park Lane hotel in Mayfair. However, the police haven’t revealed the actual reason for her death but they said, they didn’t try to treat her death as suspicious.

Irish President, Michael D. Higgins, was the first to pay her tribute. Besides him, many popular names from music industry came to show her tribute including Dave Davies (of the Kinks), Hozier, Kodaline and the Taoiseach of Ireland, Leo Varadkar, too paid her tribute.

O'Riordan died unexpectedly at the London Hilton in Park Lane hotel in Mayfair. The cause of her sudden death was not made public and police said it was not being treated as suspicious.

Dolores O'Riordan was one of the richest female artists in Ireland. The latest estimated net worth of Dolores O’Riordan’s is $25.0 million which she acc u mulated from her singing career.

She is better known as the band member of the Cranberries who sold more than 28 million copies of their first three albums and till the date, the group has sold over 40 million records worldwide.

O’Riordan endorsed many reputed brands for which she had charged a handsome sum. Besides these, she earned a good sum of amount forms her concerts as her concert ticket price ranged in thousands of dollars.

O’Riordan had an immense interest in car collection as she owned many luxurious cars including BMW, Rolls Royce, and Audi.

In 1998, O’Riordan and her former husband, Burton, owned a 61-hectare (150 acres) stud farm in Kilmallock, Country Limerick which they sold in 2004 but did not disclose the selling amount.

Often her net worth is compared with her competitors from music fraternity, Below is the comparison of their net worth.