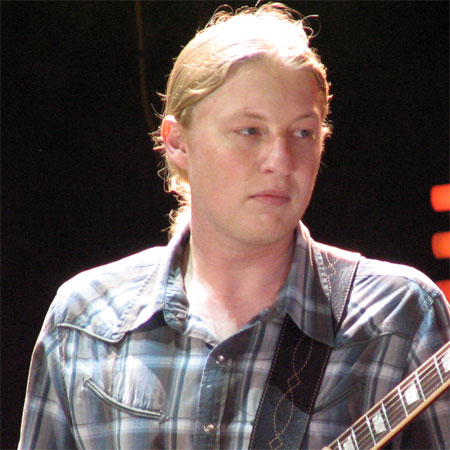 He also has been listed in the Rolling Stone's list of 100 Greatest Guitarists of All Time twice and also won Grammy Lifetime Achievement Award in 2012.

Derek Trucks was born on 8th June 1979, in Jacksonville, Florida, U.S. He was born to Chris Trucks and Debbie Trucks. He is White American as per ethnicity and holds American nationality.

His uncle Butch Trucks is one of the original members of the Allman Brothers Band whereas his younger brother, Duane Trucks, is a member of Widespread Panic and Hard Working Americans.

At the age of nine, Trucks bought his first guitar and within three years, he got his first paid performance. At the age of 13, he shared a stage with American blues guitarist and singer Buddy Guy in Thunderhawk tour.

In 1994, Derek Trucks formed his own band, The Derek Trucks Band when he was just 15 and by the age of 20, he performed with several popular artists including Bob Dylan, Joe Walsh, and Stephen Stills.

He then collaborated with Eric Clapton in 2006 and performed several concerts in 17 different countries with three other bands. In 2008, he began recording the album, Already Free, at the studio made in his house along with his band members.

Trucks and his wife Susan Tedeschi also collaborated and found Tedeschi Trucks Band in 2010 and released their debut album, Revelator, in 2011. Their band also received Grammy Award for Best Blues Album in 2012 and Grammy Awards nomination for 2018.

Then in 2014, Trucks retired from Allman Brothers Band along with fellow guitarist Warren Haynes. Rolling Stone also listed Truck in 100 Greatest Guitarists of All Time twice.

According to some source, Derek Trucks' estimated net worth is $15 million which is, however, not an official figure. Most part of his net worth is accumulated from his musical career in bands, The Derek Trucks Band, Tedeschi Trucks Band and The Allman Brothers Band and live tour performances.

His wife, Susan Tedeschi's net worth is $6 million. Their band, Tedeschi Trucks Band released several albums like Revelator, Everybody's Talkin', Made Up Mind, and Let Me Get By.