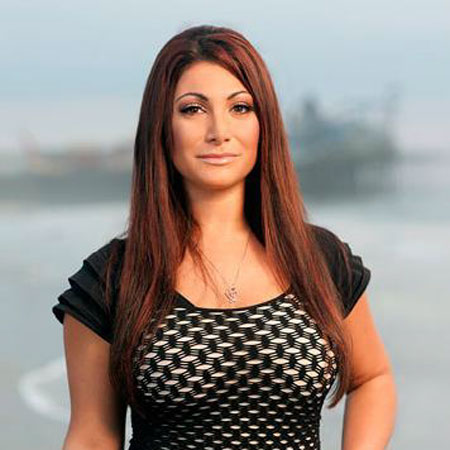 Deena Cortese was born as Deena Nicole Buckner on 12th January 1987, in the New Egypt section of Plumsted Township, New Jersey. She belongs to White-American ethnicity and holds an American nationality.

Cortese is born to Italian-American parents, John Cortese and Joanne Cortese. She has one sister, Joanie Maoirella.

Cortese went to New Egypt High School and later joined Brookdale Community College but did not graduate as she dropped out for some reasons.

Deena Cortese started her career at an early age. She auditioned the first Season of the hit MTV reality program ‘Jersey Shore,' but was rejected.

However, MTV approached Cortese again when Angelina Pivarnick stopped to play after the second Season. The show, Snooki, suggested her as a replacement.

Afterwards, Cortese joined the cast of Season 3 that was filmed at Seaside Heights in the New Jersey where she appeared along with the cast, Nicole Polizzi, Sami Giancola, JWoww, DJ Pauly D, Mike Sorrentino, Vinny Guadagnino & Ronnie Ortiz- Margo.

In the year 2010, Cortese joined another MTV show, When I Was 17 in the 31st episode along with Patrick Stump and Jenna Uskowitz.

Cortese kept on doing shows including Snooki and JWoww from 2012-2014 and joined the crew of  Couples Therapy in 2014 with the stars Farrah Abraham, Janice Dickinson, Courtney Stodden, Joe Budden and some others.

According to some sources, they first met in Freehold, New Jersey and eventually began dating since 22nd November 2011.

After dating for five years, they got engaged in 2016 in Mexico Beach. The big news was announced by Cortese showing her giant diamond ring via Instagram with a caption:

"I always knew I would spend the rest of my life with Christopher Buckner... but last night while we were walking on the Beach in Mexico he made it official!! We're engaged!!!!! @cbuckner_."

In 2011, she was also rumored to have dated, Caroline Manzo's son, Chris Manzo, a non-celebrity who rose to fame after the buzz about their affair. However, both the parties maintained a low-profile regarding their romance.

Besides that, on 10th June 2012, Cortese got arrested for disorderly conduct at Seaside Heights, New Jersey after refusing to move from the street to the sidewalk. She pleaded guilty to failing to use the sidewalk & paid a $106 fine.

Cortese is the brand ambassador of cosmetic line ‘Wisper’ and also has a clothing line. She is the lead spokesperson for the energy drink ‘Stacker.' She has accumulated a total net worth of $1 million.

As per the sources, Jersey Shore show stars were paid $5000 per episode & a signing bonus of $10,000. Likewise, she probably drew a similar amount from the show.