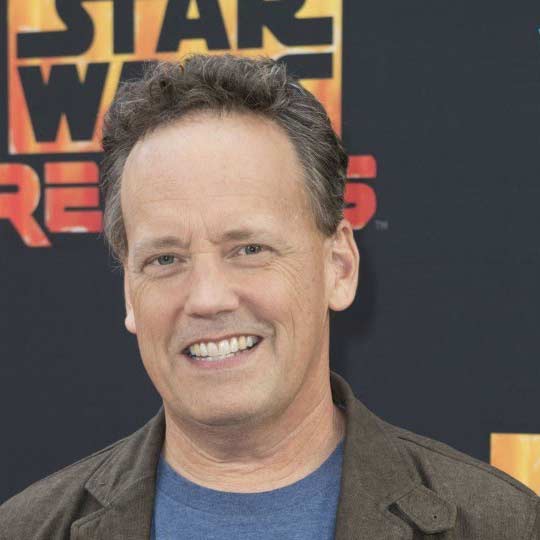 American voice actor Dee Bradley Baker is well known for his vocalizations of animals including animated series such as American Dad!, Gravity Falls, Phineas and Ferb, and Avatar: The Last Airbender.

Indiana-born actor, Baker started his career in 1989 from an improv comedy show titled "The Anacomical Players." He has won multiple Behind the Voice Actors Awards and was nominated for Primetime Emmy Award in 2017.

Born on August 31, 1962, in Bloomington, Indiana, Baker started performing at age nine and steadily worked in musicals, operas, plays, and stand-up. He grew up in Greely, Colorado spending most of his childhood days.

He is the son of Edwin ‘Buddy’ Baker and Nancy Ann McCaslin Baker. His father was a trombonist who played with Stan Kenton, Woody Herman, and Henry Mancini. He has a sister named Amy Kathryn Brierley, and a brother named Christopher James Baker.

He said in an interview with VO Studio that he was a fan of Star Trek, Star Wars, Frank Zappa, the Planet of the Apes, in his early days and also liked insects, arthropods, and dinosaurs.

He graduated from the University High School receiving a Boettcher Scholarship. He attended Colorado College in Colorado Springs, where he studied philosophy, biology, fine arts, and German.

He later moved to the University of Goettingen, where he studied overseas for a year. He was involved in singing groups and local theater productions during the time.

Baker became involved in many community theatre projects, including a sketch movie that aired on local public television after graduating with a BA in philosophy.

Baker debuted his career in 1989; he moved to Orlando to work on an improv sketch comedy show titled “The Anacomical Players” at EPCOT Center’s Wonders of Life pavilion. Later, he joined various projects for Disney and Universal Studios.

Baker made his debut on national television on Nickelodeon game show Legends of the Hidden Temple. He was the announcer as well as the giant talking rock-god Olmec in the show.

His feature film voice-over debut was on the basketball/Looney Tunes-themed movie, Space Jam where he voiced Daffy Duck and Taz.

During the time, he voiced various episodic and recurring cartoon characters on The Real Adventures of Jonny Quest, Johnny Bravo, Dexter's Laboratory, SpongeBob Square Pants and The Powerpuff Girls.

He also provided the voice of Captain Jack Sparrow's talking parrot in the refurbished Pirates of the Caribbean rides at Disneyland and the Magic Kingdom.

Baker got the lead role of Perry the Platypus in the Disney Series Phineas and Ferb in 2007. The role was finalized, as he was asked to provide three different creature sounds and sounded like a platypus. Perry became a breakout character for the series.

Baker starred in the 2008 American 3D science-fiction movie, Star Wars: The Clone Wars. He provided the voices for the characters Captain Rex and Commander Cody, as well as all the supporting Clone Troopers in the movie.

Baker's Net Worth and Salary

Baker’s net worth is $6 million at present. He has won multiple Behind the Voice Actors Awards and was nominated for Primetime Emmy Award in 2017.

His salary is over million, as he earned from the box office hits such as Star Wars: The Force Awakens ($2.068 billion), The SpongeBob Movie: Sponge Out of Water ($325.2 million), and The Hobbit: The Battle of the Five Armies ($956 million).

Baker enjoys photography, taking pictures of mostly little insects and flowers. He is a married man and has two children.

Baker married Michelle Baker in 1990. He met Michelle when they were doing children's theatre at the Colorado Springs Fine Arts Center.