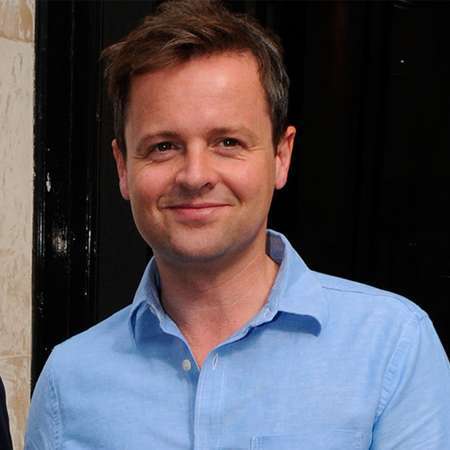 Declan Donnelly, also known as Duncan, is a television presenter and actor. He is well-known for ŌĆśAnt & DecŌĆÖ longside his best man Anthony McPartlin, they are also famous for hosting a popular show called Britain's Got Talent. Declan was born on September 25, 1975 as Declan Joseph Oliver Donnelly in Newcastle upon Tyne.

Declan is the youngest son of Anne Donnelly and Alphonsus Donnelly (Deceased on August 2011). He has six siblings' three sisters Camalia, Morya, and Patricia and three brothers Dermott, Martin, and Eamonn. DeclanŌĆÖs parents are Irish descent, origin from Desertmartin, County Londonderry, Ireland. In the 1950s, they migrated to Newcastle and purchased a house and all the seven children grew and spends their childhood here. Declan is British by nationality and white by ethnicity.

DeclanŌĆÖs career started when he was just the age of 12. Around 1987, his father saw an advertisement on local newspaper claiming that they are in search of young actor to host a Children's TV show in Newcastle. His father managed stuff for Declan'saudition. At first, he was not willing to perform ┬Ābut later he rang the producer and prayed for audition.

It was his luck that he auditioned was successful and was on the show called ŌĆ£Byker GroveŌĆØ and this was the time he first met Anthony McPartlin. Since then, Declan and Anthony became partners and soon rose to fame. The duo host a popular entertainment show titled ŌĆ£Ant & DecŌĆÖs Saturday Night TakeawayŌĆØ. They also host ŌĆ£IŌĆÖm a celebrity...Get Me Out of Here!ŌĆØ, a reality show owned by ITV. The show is about putting different celebrities in the middle of Australia's jungle and the participant have to compete each other and win the show.

Ant & Dec also host another ITVŌĆÖs show called ŌĆ£BritainŌĆÖs Got TalentŌĆØ, which made a huge success. They together currently host a couple of more shows, such as ŌĆ£Ant & DecŌĆÖs Push the ButtonŌĆØ and ŌĆ£Red or Black.ŌĆØ They became so famous that they even starred in a 2006, movie ŌĆ£Alien AutopsyŌĆØ, a science fiction comedy directed by Johnny Campbell. Anthony and Declan owned a production company, where they produced their shows. The company is named Mitre Television.

Declan,so far ┬Āhas won 29 awards and nine nominations, including some duo awards. Not much is known about DeclanŌĆÖs private life, however we do know that he first aimed to be a Catholic priest, but after he saw the girls from Sacred Heart Catholic High School, he changed his mind (Lucky Dec). He is one of the nationŌĆÖs most admired man and has dated many beautiful celebrities. He had a brief affair with singer Clare Buckfield and Georgie Thompson, a Sky Sports presenter.

Declan also had a relation with a member of Pussycat Dolls, Ashley Roberts. However, he is now a married man and his wife is┬ĀAli Astall, his manager. Their engagement was publicized on 13, November 2014 and finally got married with his long term girlfriend Ali Astall on 1, August 2015. The wedding was held at St. MichaelŌĆÖs Roman Catholic Church, Elswick, Tyne and Wear, Newcastle. The ceremonial was conducted by DeclanŌĆÖs older brother, a Catholic priest Fr. Dermott Donnelly and Anthony was his best man.

Till now, there is no rumor or news about the two getting divorce. The wedding was witnessed by their family and dear ones, including Phillip Schofield, Holly Willoughby, Tess Daly and Paddy McGuinness. After the wedding the couple went for a month long honeymoon. They currently live together in London, where they bought a house worth $1.9 million just 150 feet apart from his duo Ant. Ant is living with his wife Lisa Armstrong.

In June 2008, Dec & Ant ran into controversy when an ITV investigation found out that they were wrongly awarded the People's choice British Comedy Award in 2005 and Catherine Tate should have won the mishandled premium rate phone vote for the prize. However, there was no further news about the controversy. Ant & Dec involved in many charities, Sunshine Fund.

Their single 'Let's Get Ready to Rhumble' reached No.1, Ant & Dec donated all the single's success to the ChildLine. They also backed the Text Santa appeal. Donnelly even supports the Diocese of Hexham and Newcastle Youth Ministry Team , directed by dean of St. MaryŌĆÖs Cathedral, Newcastle, Fr. Dermott Donnelly, DeclanŌĆÖs older brother. In 2013, they opened the W4 Youth Centre.

Moving on to the┬Ābody measurement of the TV Presenter, Dec is 5 feet 6 inches (1.68 m) in height and approximately about 55-60 kilograms (121.25- 132.27 pounds). He has a net worth of $62 million and a lucrative amount of salary. One might be thinking that, how did he managed to earn so much? Well, here how the thing goes, Declan Donnelly and his partner Anthony McPartlin hosted many high profile tv shows, such as BRIT Awards, Ant & DecŌĆÖs Gameshow Marathon, PokerFace, Text Santa, and BritainŌĆÖs Got Talent .

Every shows they hosted were well-paid! ┬ĀIn 2007, Dec and Ant signed a contract with ITV channel worth ┬Ż30 million. That's not bad at all folks. Declan DonnellyŌĆÖs bio can be obtained from Wikipedia and iMDB as well. He is also active on several social networking sites.