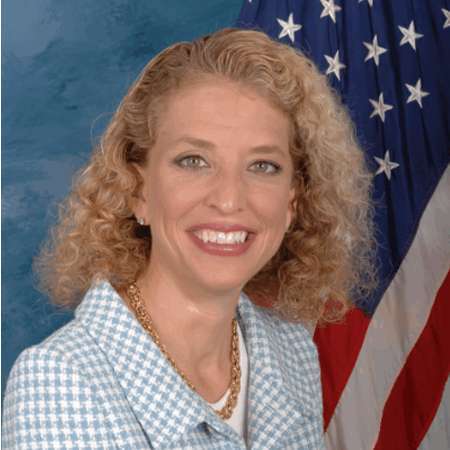 Debbie Wasserman Schultz is an American politician. She is a member of the Democratic Party, also the U.S, Representative for Florida’s 23rd congressional district and the chairperson of the Democratic National Committee. She was born on September 27, 1966, in Forest Hills, Queens, New York. She is the daughter of Larry and Ann Wasserman. Her father is a CPA. She spent most of her childhood in Lido Beach on Long Island. Later on, her family moved to Melville which was also on Long Island.

She graduated from high school in the year 1984 and received a Bachelor of Arts and Master of Arts with a certificate in political campaigning in the year 1988 and 1990 respectively, both in Political Science, from the University of Florida in Gainesville. During her time at the University of Florida, she was active in student government and was also served as Vice President of the UF College Democrats and President of Graduate Student Council.

In the year 1988, Wasserman became an aide to Peter Deutsch at the starting of his state legislative career. In 1992 she went on to win the general election with 53 percent of the vote and succeeded Deutsch in Florida’s House of Representatives. After this win only at the age of 26, she became the youngest female legislator in the state history. For eight long years, she served in the Florida State House of Representatives and had to leave due to state term limits.

Wasserman was also recommended to the House Appropriations Subcommittee on State and Foreign Operations, where she will work to reduce the poverty from the world and also will advocate for funding for security, economic, and humanitarian assistance. She was the First Jewish Congresswoman ever elected from Florida. She introduced a resolution, which passed the House of Representatives and called on the President to declare an annual Jewish American Heritage Month.

Wasserman, from her experiences, got an opportunity to enhance her commitment to lower health care costs, protect Social Security and Medicare, improve the quality of life of the children, and provide a sensible homeland security plan to protect the citizens from the ongoing threat of terror. She also continued to fight to ensure that firefighters and local police have the necessary tools to do their job properly and also took up the fight to give troops and veterans the equipment and compensation they deserve.

The politician got married to banker Steve Schultz in the year 1992. Now, the couple has three young children. Her husband Schultz no longer has his career as a banker. He decided to support his wife’s career by staying at home with the kids as a stay-at-home dad. In March 2009, she confirmed that she had undergone seven surgeries related to breast cancer. Later on, she even promoted efforts for early screening for breast cancer. Now, the congresswoman is fit and healthy and resides in Weston with her beautiful family.

Debbie has been able to be an inspiration for a lot of people out there and it is only because of her powerful and motivational work that she has done for the country. According to some sources up to the year 2014, her net worth was estimated at $972 Thousand dollars. However, the information related to her current net worth and salary are unavailable. Likewise, her personal details such as height, weight are also not updated. For the detailed facts about the works done by Wasserman, Schultz, there are plenty of information is available in her wiki and bio.