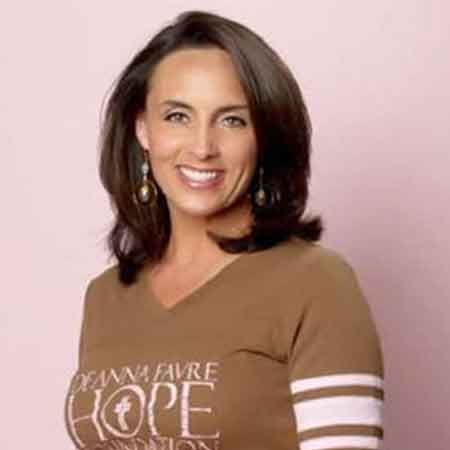 Deanna Favre is widely popular for being a wife of Brett Favre who is a former NFL quarterback. Brett Favre led the Green Bay Packers to victory in Super Bowl XXXI and retired as the all-time leader in pa s sing yards and touchdowns. Deanna has established the Deanna Favre Hope Foundation, which supports breast cancer education, women's breast imaging and diagnosis services for all women.

Deanna Favre was born as Deanna Tynes Favre, on December 28, 1968, in Kiln, Mississippi, US. She belongs to American nationality and ethnicity wise, Deanna is a Caucasian. Her step-father, Kerry Tynes adopted her, after he married her mother, Ann.

Deanna has a sister, Christie and a brother, Casey who grew up in Kiln, Mississippi. She first met her husband, Favre while they both were growing up in Kiln. They had attended school together from their early days and began dating in high school during Favre’s freshman year and Deanna's soph 0re year.

After Deanna completed her high school level, she went on to study at a community college in Poplarville on a basketball scholarship. After she spent two years at community college, she transferred to the University of Southern Mississippi and finished her degree in exercise science in December 1994.

As a high school student, Deanna began dating Brett Favre. After she transferred to the University of Southern Mississippi, She became pregnant and gave birth to Favre’s daughter, Brittany Nicole, on February 6, 1989.

In the year 1995, Deanna moved to Green Bay, Wisconsin to live with Favre. During that time, their relationship was strained. After that, she explained that Favre frequently disregarded her and their daughter Brittany.

Deanna then described him as,

Deanna also once decided to leave her boyfriend, Favre but she wasn’t able to do that because she was worried about his addiction to Vicodin might become worse if she left.

After his recovery, Brett attributed his girlfriend Deanna as the cause, he overcame the addiction. Following his recovery, Deanna Tynes and Brett Favre tied their knots on July 14, 1996, at St. Agnes Catholic Church in Green Bay.

The couple’s second daughter, Breleigh Ann, was born on July 13, 1999. Other than that, she has also faced many circ u mstances in her life. She lost her brother, Casey Tynes in an all-terrain vehicle accident on the Favres' Mississippi property, on October 6, 2004.

Just eight days later of her brother's death, Deanna was diagnosed with breast cancer. As she underwent treatment, she received a number of motivating letters from women all over the country relating how they were motivated to get breast examinations after hearing her story.

Deanna made a complete recovery, after a lumpectomy and five months of chemotherapy. In late August 2005, Brett Favre’s home was destroyed by Hurricane Katrina which was situated in Hattiesburg. During that horrifying incident, the family members were not injured.

Deanna Favre’s exact figure of net worth isn't disclosed to the media. But, her husband Brett Favre has earned a good amount of net worth from his prolific career. Brett’s current net worth is estimated $100 million.