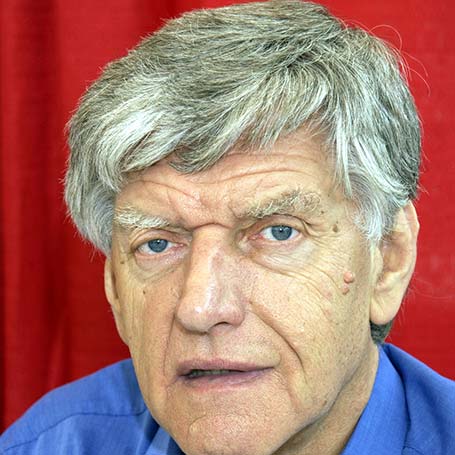 With a towering height of 6ft, 6 inches, and muscular physique David Prowse has established the magnificent career in competitive heavyweight weightlifting as well as in the acting world. The actor gained worldwide popularity following his breakout character of Darth Vadar in the blockbuster movies Star Wars, The Empire Strikes Back, and Return of the Jedi. His role in the doc u mentary movie I Am You Father also brought him further fame. Prior to his unforgettable role of Vader, the successful actor also regarded as a leading figure in British culture for his character of Green Cross Code man.

David Prowse was born on 1 July 1935, in Bristol, England, United Kingdom. He grew up on the Southmead housing estate in Bristol. He was raised by her mother and never disclosed his father. He also has a brother named Bob Prowse.

Prowse got the scholarship at Briston Grammar School. He first started working as a bouncer at a dance hall. Following his initial success in the British heavyweight weightlifting championship, Prowse made his way to Briston in the year 1963 in order to work for a London weightlifting company.

He subsequently gave training to many actors like Christopher Reeve for the role of Superman in the 1978 film as well as Cary Elwes for his role as Westley in The Princess Bride.

Prowse later made his smooth transition in the world of acting. He made his film debut with a role in 1971 movie A Clockwork Orange. Similarly, the actor landed the role in many other hit movies and TV series which include Doctor Who, The Time Monster, The Tomorrow People, Jabberwocky, As You Like It, and more.

Prowse made his break after his amazing performance in the movie Casino Royale. His career reached a new height after his breakout role of Darth Vader the 1977 epic space-opera movie Star Wars, was turned out to be one of the highest-grossing films of all time until the release of E.T. the Extra-Terrestrial in the year 1982. In the movie, he played the role alongside Harrison Ford, Alec Guinness, and more.

Subsequently, the actor played the role in two other box office hit movies The Empire Strikes Back as well as Return of the Jedi.

David Prowse has an estimated net worth of around $3 million. The actor has collected such a  hefty amount from his various works.

Most notably, Prowse played the role in the super duper box office hit movie Stars Wars which grossed a whopping box office collection of around $461 million in the U.S. and $314 million overseas, totaling $775 million against $11 million budget. Since the movie was blockbuster, the actor obviously received a certain percentage of profit the movie made.

He also worked in movie The Empire Strikes Back also became the commercially hit racking up over $538 million, worldwide. The movie starring Harrison Ford and Anthony Daniels as well.

Besides, David is also the 1962 British heavyweight weightlifting champion and also landed a various job working as a fitness consultant around London. It is also the major part of his net worth.

Further information about his cars and houses is yet to be revealed.

David Prowse is a married man. He tied the knot to Norma E. Scammell on October 5, 1963, in an intimate wedding ceremony. He met his wife for the first time while he was working as a bouncer at a dance hall in early 1960.

The couple dated a couple of years until walking down the aisle in 1963. They are also blessed with three children. The age and names of their kids are a little unclear.

Prowse and Scammell have been sharing the blissful married life from the last six decades and still sharing the loving marital relationship together. The family currently resides in Croydon, London, England.

David has also a pa s sion for motorcycles.

During the 2009 European Parliament election he also supported the United Kingdom Independence Party.

David Prowse battle arthritis for longer of half of his life. It affects the joint. At the age of 13, the symptoms arthritic appeared and apparently disappeared after he initiated his career in competitive weightlifting. They again appeared in 1990 and his left arm became paralyzed in 2001 too.

After the infection, David was also diagnosed with septic arthritis which was really fatal and nearly killed him. Prowse announced in March 2009 at the Royal Marsden Hospital in South London, that he was also fighting with prostate cancer and has undergone radiation therapy since the beginning of 2009.

In November 2014, it was reported by Daily Mirror that the actor had dementia which drastically reduced the thinking and remembers power. David, nonetheless, denied the claim, admitting instead he had problems with his memory.

David Prowse announced his retirement from acting and public appearances, in early 2018. He took retirement earlier than expected due to his ill health.

The actor has also been engaged to many charitable organizations. And for his philanthropy work and his services to Road Safety, Prowse, likewise, became a Member of the Order of the British Empire.