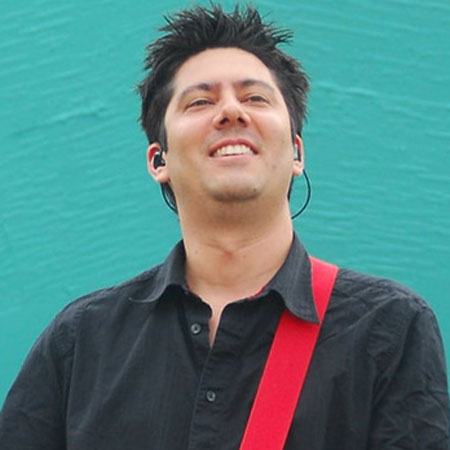 Multiple Juno Award-winner Dave Genn is a musician, producer, multi-instrumentalist, and performer whose musical pedigree boasts a diversity and scope that spans over twenty-five years in the business. Genn is also a member of Canadian rock group 54-40.

Genn is the son of Carole and Robert Genn. His father was a well-known Canadian artist, who has gained recognition for his style, which is in the tradition of Canadian landscape painting.

Genn grew up with his siblings, Sara Genn who is an artist and James Genn who is a Canadian film and TV writer as well as director.

He began his musical career as a guitarist when he joined Canadian rock group 54-40. Since 2003 Genn has been the lead guitarist for Canadian alt-rock heroes 54-40 and has appeared as a producer, writer, and performer on the band’s most recent albums “Northern Soul”, “Yes To Everything”, and ”Lost in the City”, in conjunction with playing over four hundred shows with the group.

Before his tenure with 54-40 Genn was a member of the Matthew Good Band from ’95 until ’01. During his time with MGB Dave was the co-writer, guitarist, keyboardist and background vocalist on the number-one hits Apparitions, Load Me Up, Hello Time Bomb and Strange Days.

Genn also produced career-making hit singles for pop-rock juggernaut Marianas Trench, including the number-ones Cross My Heart, Shaketramp and All to Myself.

Genn has written, recorded , produced and performed with artists as talented and divergent as Art Bergmann, Thornley, Daniel Wesley, The Grapes of Wrath, Strapping Young Lad, Holly McNarland, Faber Drive, The Lowest of the Low, Emm Gryner, Ten Second Epic, No Northcote, and Pure, among others.

Genn’s soundtrack work for the film has garnered him three Leo Award nominations to date. His most notable scores for the short films Direct Lines, The Dogwalker, Second Date, and The Flying Lion have led him to compose the original soundtrack for the feature film Old Stock in 2013.

Genn has also acted in the capacity of Musical Director for award shows as well, most notably the NHL Awards ’07 and Canadian Video Game Awards ’12.

Dave Genn married his girlfriend Tamara Taggart on 4 February 2006. His wife Taggart is a Canadian television presenter who currently works as a weekday anchor of CTV News at Six alongside Mike Killeen on the CIVT-TV in Vancouver, British Columbia.

Genn’s father Robert pa s sed away peacefully at home on May 27, 2014, surrounded by the love of his family after a heroic and graceful challenge with pancreatic cancer. Genn currently lives in Vancouver with his wife and children.

The talented artist has garnered a huge amount of net worth from his long time career. However, his current net worth has not disclosed yet. Besides, his life seems to be luxurious as he keeps posting several photos with luxurious items.