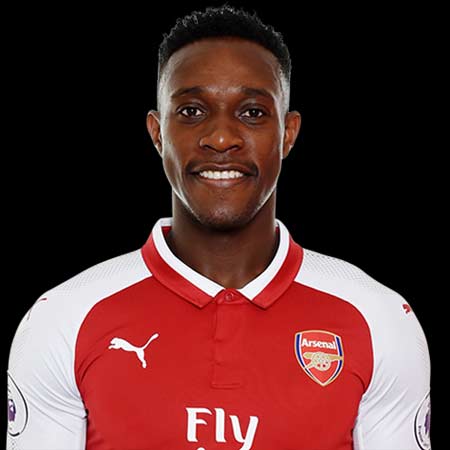 At one point in his career, Danny Welbeck was England's brightest footballing prospect. Coming from Manchester United's famous youth academy he broke through in the first team during 2010/11 season. He was hailed by Sir Alex Ferguson as a player having bright future but unfortunately, due to several injuries, he could not fulfill his potential. He was later transferred to Arsenal but still, due to his injury prone nature, he could not get a regular game time.

Danny Welbeck is a pacey striker who can play as central forward or on either flank. He has a tall figure and has a tremendous technique in front of the goal. He is included in 23 man squad to feature in FIFA World Cup 2018.

At his young age, he played for a local club Fletcher Moss and at eight years of age joined Manchester United 's Youth Academy. He played several matches for Youth team of Man United before making his loan move to Preston North End where he remained for one year. At the start of 2010/11 season, he was again loaned to Sunderland in which he scored six goals in 26 appearances.

On 2nd December 2014, Danny Welbeck joined Arsenal for a transfer fee of $21 million. Welbeck made his Arsenal debut against Manchester City in a 2-2 draw on 13th September. He scored his first goal for Arsenal against Aston Villa in a 3-0 win. He scored his first career hattrick in UEFA Champions League match against Galatasaray in a 4-1 win. Just like his Manchester United career, his Arsenal career was also full of injury. He never scored more than 10 goals in his Arsenal career until 2017/18 season in which he finished with 10 goals in all competitions.

Danny Welbeck appeared for England National team in various youth level of Football which includes Under 17, Under 18, Under 19 and Under 21. He played a crucial part in helping England reach the finals of Under 17 2007 UEFA European Championship.

He made his senior England debut in a match against Ghana on 29th March 2011. He was also part of 23 man squad to play in Euro 2012. He scored his first goal for England in a Euro 2012 match against Belgium in a 1-0 win. He again scored in Euro 2012 in a 3-2 win against Sweden. He scored four goals in FIFA Worldcup 2014 qualifiers and was enlisted in 23 man squad to feature in World Cup finals. During UEFA Euro 2016 qualification he was England's top scorer with six goals in five matches.

Danny Welbeck earns $93,481 per week as salary from Arsenal F.C. His estimated net worth is around $13 million.

He and Spurs star Erik Lamela both were interested in a penthouse priced $4 million in Hadley Wood, Hertfordshire with crocodile door handles and 24-carat gold caps. No confirmation came about him buying the house.  His car collections include Audi and Range Rover. He endorses Nike brand.

Danny Welbeck likes to keep his relationship life as secret as possible. He is not married yet and has not made his current affairs public. However he at some point he was dating Nigerian lady named Opeoluwa who is currently living in Canada. The pair met during Welbeck's holiday in Canada. After few months of a relationship, the couple broke up posting pictures in their respective Instagram putting cheeky captions.

Both father and mother of Danny Welbeck are originally from African country Ghana. His family is living in Ghana and he often goes to Ghana during the holidays to spend time with family.