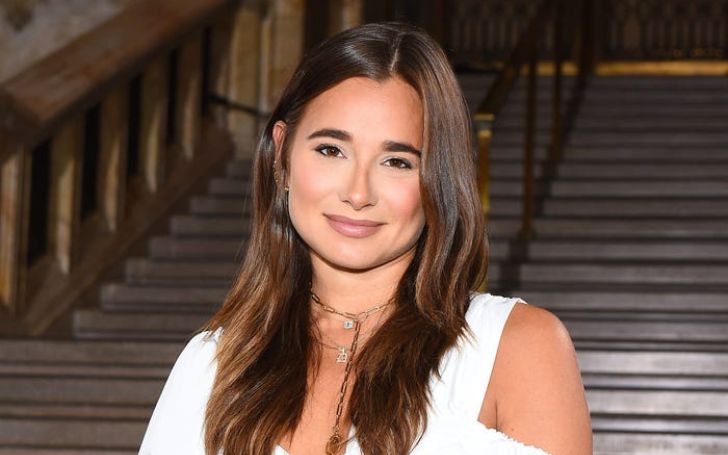 Danielle Bernstein, 28, is an American fashion designer best known as the founder of the fashion blog and brand WeWoreWhat. Similarly, she is also known for stealing designs from smaller brands and suing them in the aftermath.

Danielle Bernstein was born on 28th May 1992 in Great Neck, New York, the United States of America. She is an American as per her nationality and has mixed ethnic descent. 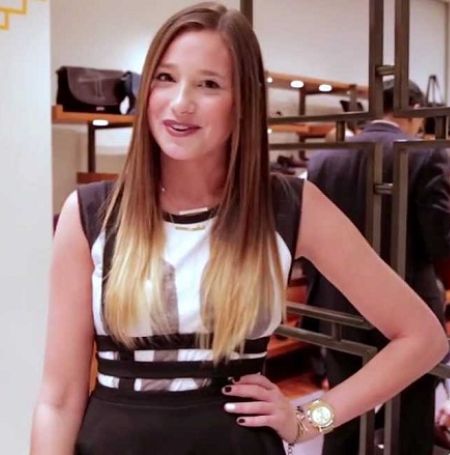 CAPTION: Fashion blogger/designer Danielle Bernstein began her blogging career when she was a soph 0re in college SOURCE: Wortholino

As of 2021, she is 28 years old. She went and graduated from William A. Shine Great Neck South High School in 2010. Likewise, she enrolled at the University of Wisconsin-Madison and studied retail before transferring to the Fashion Institute of Technology in New York City.

How Did She Begin Her Fashion Career?

In 2011, Danielle started WeWoreWhat as a street-style photographer which eventually turned into a personal-style blog and gained ma s s popularity.

Likewise, in 2016, Bernstein launched a direct-to-consumer line of overalls called Second Skin Overalls. The following year, she was placed on the Forbes 30 Under 30 list at the age of 24.

She then collaborated with a New-York based clothing company called Onia and designed swimwear. It was exclusively sold at Intermix and was their best-selling suit that summer. Because of the success, a few years later, she launched her own swimwear line with Onia as her partner. 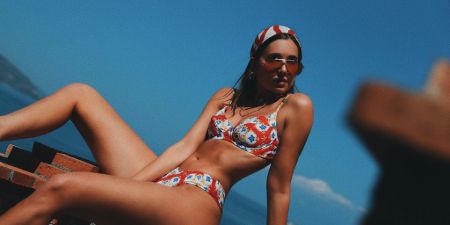 CAPTION: Bernstein in one of her own swimwear made in collaboration with Onia SOURCE: Business Of Fashion

In 2019, she launched a tech company named Moe Assist following her longtime intern-turned-a s sistant Moe Paretti. It is the first product management and payments tool specifically geared for an influencer's workflow. She also raised $1.2 million in a friends-and-family round of funding.

In March 2020, Danielle launched a namesake brand called Danielle Bernstein at Macy's. The debut spring collection had a size range of 00-24 and was priced under $100. It sold $1 million in the first 2 hours and about $2 million after 24 hours.

Similarly, in May 2020, she published an autobiography This is Not a Fashion Story: Taking Chances, Breaking Rules, and Being a Boss in the Big City. The book was listed on the New York Times Best Sellers and was featured on the Business List.

How Rich Is Danielle Bernstein?

Th 28-year-old fashion designer began her blog career during her soph 0re year. As of now, she has a swim line and a line of overalls with Onia and has invested in six different companies.

According to Forbes, she can make in between $8,000 to $20,000 from Instagram depending on the type of post and the project requirements.

Though her exact net worth is not revealed, she reportedly earns seven figures annually.

Did You Know? When Danielle Bernstein launched her Second Skin overalls in 2016, she reportedly sold goods worth $40k in just three hours.

Personal Life- Who Is She Dating?

The entrepreneur is in a romantic relationship with a man whom we can often see on her Instagram posts. The couple has been dating for a while now, however, his identity is not revealed. 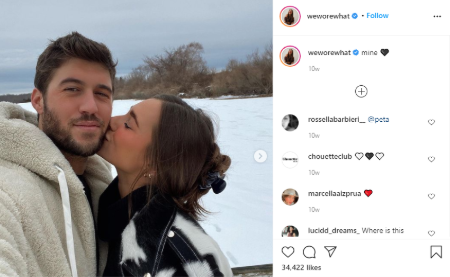 CAPTION: Danielle posted a picture of her kissing her boyfriend on 15th February 2021 with a caption "Mine" SOURCE: Instagram @weworewhat

In September 2020, she revealed that she and her boyfriend tested positive for COVID-19. Few weeks earlier, she was seen partying in Hamptons along with 30-40 people maskless.

Prior to this, Danielle was dating a guy 10 years older then her.

Throughout her career, Bernstein has been accused of copying others' design. In 2018, she received attention for copying the designs of various jewelry brands when she launched a series of products with Nordstorm.

Recently in 2020, Diet Prada, an Instagram account and fashion watchdog group highlighted that the mask Bernstein wore was nearly identical to a patent-pending model created by a Latino brand called Second Wind. She denied that she has copied the design from Second Wind.

Likewise, in January 2020, a clothing reseller posted swimwear for sale on the Poshmark platform. The Swimwear turned out to be unreleased samples of Bernstein's swimwear collaboration with Onia.

She later met the CEO of Poshmark in person and came to an agreement where the reseller was given merchandise from previous collection for sales at a greater value.

You may also like Diana Vickers, Taryn Manning, and Sabrina Bryan.