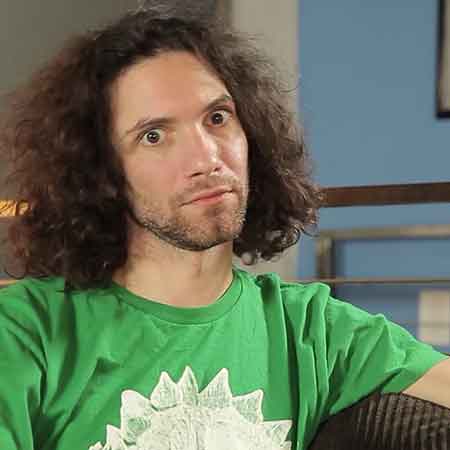 Popularly Known as Danny Sexbang, Dan Avidan is a man of all seasons- he is a singer, songwriter, and host. For his decorative career of almost a decade, the singer has produced many popular albums and singles. Avidan, however, is best known for his work in his group Ninja Sex Party accompanied by his musical partner Brian Wecht. As of 2018, the group has released it's sixth studio album and is working on the seventh one. Notwithstanding his flourished career, the singer is leading a secretive personal life.

Dan Avidan was born Leigh Daniel Avidan on 14 March 1979 in Springfield, New Jersey. His parents are Avi Avidan and Debra Schwartz. He has a younger sister named Dana Avidan Cohn who is a bench jeweler as well as an executive style director of PopSugar. According to his date of birth, Dan's zodiac sign is Pisces.

His father was originally from Isreal who later migrated to the USA. He has American nationality and has a mixed ethnicity.

Avidan attended the Jonathan Dayton High Scool and graduated in 1991. After high school, he went to the Boston University, Boston, Ma s sachusetts but he changed his college and moved to the Tufts University Satellite Campus, France. In the Satellite Campus, Avidan studied botany.

At the beginning of his early career, Dan Avidan joined a Philadelphia based group in 2002. The band consisted of members Aron Brand, Jeff Rains, Alex Yaker, Justin Earley, and Ian Creech. Dan was a lead singer of the band, and in 2005 the band released a self-titled EP, The Northen Hues. The band performed at World Cafe Live, Philadelphia but in the mid-2005, the band split.

After the band's split, Avidan went on working with Peter Lennox and formed a Brooklyn based alternative rock duo Skyhill in 2006. In 2007, the group released their first full album Run With The Hunted in May 2007. The two went on touring New York in the year 2008, but due to some differences, Avidan and Lennox decided to quit the group work.

Since the split in 2008, Avidan and Lennox reunited to release their single Firefly. Later, Dan also said, he and Lennox might be seen working together in the Skyhill but as of 2018, there are no new projects of the two.

After Skyhill the talented singer found his way to form another group titled Ninja Sex Party, every people's three favorite things. The group was formed in 2009 when Dan Avidan joined another member Brian Wecht who is a multi-instrumental musician. To represent the group, Avidan and Wecht eventually decided to name themselves as Danny Sexbang and Ninja Brian respectively. In October 2009, Dan and Brian created a YouTube channel under the name of their group Ninja Sex Party.

After their collaboration, the two first performed in the Leitman's Improvisational Comedy show Stripped Stories. Following the performance in the show, the group saw huge popularity. In the year 2011, they released their debut studio album NSFW. From the album, they released the singles; Dinosaur Laser Fight, Manticore, Three Minutes of Ecstacy, I Just Want to (Dance), and others.

In 2013, the group released their second studio album titled Strawberries and Cream. The album consisted of the songs like FYI I Wanna F Your A, Unicorn Wizard, Next to You, Best Friends Forever, and others. Then in 2015, the group released their third album Attitude City which includes songs; Party of Three, Dragon Slayer, Attitude City, and others.

Continuing their successful journey, Avidan and Wecht released their sixth album Cool Patrol in 2018. Currently, the two are working hard for their upcoming album Under the Cover, Vol. III which will be released in 2019.

Rehearsing for our appearance on the Conan O’ Brien show tonight! #teamcoco

In 2013, Dan Avidan and his partner Brian Wecht worked on their side project Starbomb. From the band, they wrote parody songs about video games. From the sideband, Avidan and Wecht released two albums; Starbomb (2013) and Player Secret (2014).

Apart from his group, Avidan has appeared as a guest on many series like Did You Know Gaming?, Good Mythical Morning, Mighty Magiswords, and many others.

Dan Avidan is working hard for the betterment of his career. For his music career of around a decade, the singer is earning a handsome amount of money however, his exact net worth is yet to be revealed. Multiple sources claim, Avidan has an incredible net worth of $3 million.

From their YouTube channel Ninja Sex Party, Avidan is making a decent amount of money. As per sources, the channel is making an estimated monthly income between $703 to $11.2K and the channel's annual income is $8.4K to 134.9K. As of September 2018, the channel has more than 1.1 million subscribers with incredible views of over 172.1 million.

The renown singer Dan Avidan is yet to be married. As of 2018, the singer is single and isn't dating anyone. Seems the talented artist is focused on his flourishing music career rather than his love relationship. Despite being a public figure, the actor wasn't spotted with anyone in public and wasn't also rumored to have a girlfriend.

My sister, mom, and nephew. Couldn't love these people more!

He is seen spending quality time with his family and he frequently posts pictures of them on his Instagram. Other than that, the Ninja Sex Party singer is keeping his personal affair away from the mainstream media.

Here's a video of Dan Avidan.