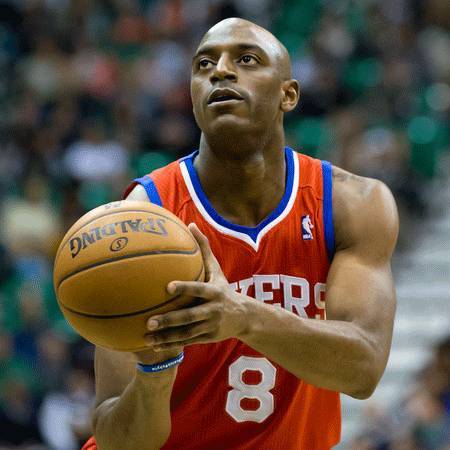 Damien Lamont Wilkins was born on 11th January 1980 in Washington, North Carolina to parents Vita Wilkins and Gerald Wilkins. His father Gerald Wilkins is a well known retired American professional basketball player who played for NBA’s New York Knicks and other teams for 13 years. He spent his childhood playing with his father and his two siblings, Jasmyn and Holli . Jasmyn is Miss Georgia USA 2012 and Miss USA 2012’s 4th runner-up where as Holli plays in the Furman Women’s team.

Damien attended Dr. Philips High School in Orlando, Florida. He then went on to attend NC State in 1999 where he played for the varsity team till 2001, after which he was transferred to Georgia in 2002. He was declared eligible for 2001 NBA Draft but denied and withdrew and thus was transferred to University of Georgia. He was left undrafted in the 2004 NBA draft, so he joined the Seattle Super Sonics . At the end of his rookie season, Damien went on to score 21 points at Portland on 24th March 2005. In 2005 Playoffs he was left injured but he finished with 15 points, six rebounds and five steals in a game against San Antonio. He then went on to score his career high 41 points and earned 9 rebounds against Atlanta Hawks. In 2009 he signed to Minnesota Timberwolves as a restricted free agent in the summer of 2005.

However, in September 28 2010 he was traded to Memphis Grizzlies. He was soon waived off at the end of the training camp. In 2011 Damien signed with Atlanta Hawks who then released him after a month. In 2011, Damien briefly joined with Detroit Pistons. In September 2012 he was acquired briefly by Philadelphia 76ers. Then in December 2013 he joined China’s Beijing Ducks. In the first game with the Ducks, he went on to score a total 10 points, 2 rebounds and a assist. In 2014 he signed with Indios de Mayaguez of the Baloncesto Superior Nacional league of Puerto Rico. Then he was traded to Iowa Energy of the D-League. Yet again in 2015 he returned to Indios.

Damien is of appropriate age to be married but he is not seen with many women in public. He is reluctant to speak about his personal life to the media. Damien Wilikns is not married but allegedly has a son with Latosha Lee. The couple are not together now and neither of them have agreed or denied this information till date.

Damien Wilkins is currently 35 years old , weighs nearly 102 kgs and is 6 feet 6 inches tall. His salary is estimated to be 854389 USD according to the statistics of 2013. Damien has been noted as All-NBA D-League Third Team and NBA D-League All-star in 2015. Through his performance , it can be said that Damien will have a bright future in basketball like his father and uncle Dominique Wilkins.