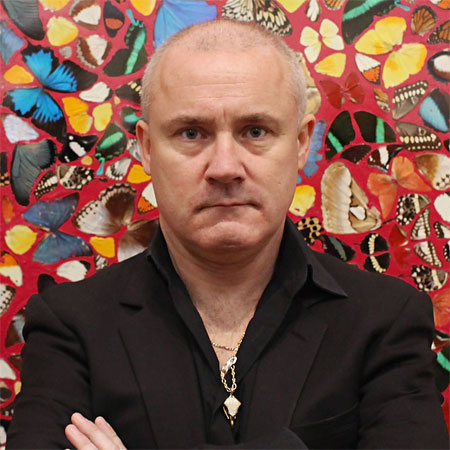 Damien Hirst is an English artist as well as an entrepreneur who is known for his artworks of dead animals and medicine cabinet sculptures. With his controversial and shocking works, he has emerged to be one of the famous artists in Britain.

Damien Hirst was born as Damien Steven Hirst on 7th June 1965 in Bristol, England, United Kingdom. He belongs to Caucasian race/ethnicity and holds a British nationality.

Hirst is born to shorthand typist, Mary Brennan where his biological father identity is unknown. When he was two years old, Hirst’s mother married William Hirst, a motor mechanic. Later on, his mother worked for the Citizens Advice Bureau.

At the age of twelve, Hirst left the family. He was a moody child and was raised as a Catholic. From an early age, Hirst expressed an internet in the horrific and gruesome aspects of life.

As a teenager, Hirst developed a liking towards illustrated pathology books and fascinated by the images of disease and injury. He also had an interest in drawing, a pa s sion his mother supported. Hirst grew up to be a troubled teen and was subsequently jailed twice in charges of shoplifting.

Despite the lack of discipline in his childhood life, Hirst was accepted into the Jacob Kramer School of Art in his second attempt after a successful application to the Foundation Diploma course.

From 1986 to 1989, Hirst studied Fine Arts at the Goldsmiths College, University of London. As a student, he worked at a mortuary, an experience that influenced his later artistic career.

During the time in college, Hirst severed as the main organizer of an independent exhibition title, Freeze. The show featured his works and the works of other artists such as Sarah Lucas and Fiona Rae.

After graduating, Hirst’s works were included in a group show at Kettles Yard Gallery in Cambridge and also in New Contemporaries show. Subsequently, he attended an emerging movement known as the ‘Young British Artists’ which was known for its unusual works and interesting art concepts.

In 1991, Hirst’s solo exhibitions were held at Institute of Contemporary Arts, and the Emmanuel Perrotin Gallery in Paris. While his works mostly met with negative responses, he had support from Charles Saatchi, an advertising titan & art collector.

In 1992, Hirst participated in the Young British Artists exhibition at Saatchi Gallery where he displayed ‘The Physical Impossibility of Death in the Mind of Someone Living,’ a 14-foot-long gla s s tank with a shark preserved in formaldehyde.

In 1993, Hirst’s first major international presentation was held at Venice Biennale. He showed his artwork titled ‘Mother and Child Divided.’ It is an installation piece that featured a bisected cow and her calf displayed in four vitrines, or gla s s cases, filled with formaldehyde.

In subsequent years, Hirst also exhibited in shows in Seoul, London and Salzburg. In 1997, his autobiography & art book titled One to One, Always, ‘I Want To Spend the Rest of My Life Everywhere, Forever, Now,’ with Everyone, was published.

In addition to his gla s s tank works, Hirst also made paintings and sculptures. In 2007, he unveiled "For the Love of God," a glittering, diamond-encrusted skull made of platinum.

In 2009, Hirst exhibited a collection of paintings, ‘No Love Lost, Blue Paintings,’ which provoked the anger of many critics who labeled him as dull and unprofessional.

Hirst participates in exhibits around the world. Again making art more accessible, he launched his skateboard line in 2011.

Damien Hirst is possibly single at the moment, but previously he was in a longterm relationship with his Californian girlfriend, Maia Norman. The duo was together for 20 years before their official split.

They first encounter in 1992 and eventually fell in love. However in 2012, they broke-up, but due to their secretive nature, they haven't revealed the reason behind it. The duo never got married, but Hirst referred to Norman as his "common-law wife."

The pair is proud parents of three children; Connor Ojala, (born 1995), Ca s sius Atticus (born 2000) and Cyrus Joe (born 2005). Since the birth of his first son, he started spending time at his remote farmhouse near Combe Martin, Devon.

Hirst has officially admitted that he has serious drugs and alcohol problems in the 1990s which lasted for ten years, he said,

"I started taking cocaine and drink... I turned into a babbling f** King wreck."

Due to his wild behavior, he faced many criticism and hatred. Once he put a cigarette at the end of his penis in front of journalists.

Hirst is a very good friend of Rolling Stones guitarist, Ronnie Wood. He also involved in charitable works. He is a great supporter of Survival International, the indigenous rights organization. Even Hirst donated his work, Beautiful Love Survival, at the Sotheby’s London sale, Beautiful Inside My Head Forever, to the organization to raise money.

In 2009, he contributed his writing to the book; We Are One: A Celebration of Tribal Peoples which explores the existence of, and threats to, indigenous cultures around the world.

Damien Hirst is the richest English artist with a total net worth of $300 million. In 2008, he earned $198 million from his auction, Beautiful Inside My Head Forever reportedly the largest amount raised by any living artist to date.

Hirst holds a record with £10.3 million for The Golden Calf, an animal with 18-carat gold horns and hooves which was preserved in formaldehyde.

In 1992, his art which entitled as The Physical Impossibility of Death in the Mind of Someone Living was sold at £50,000. His 2003 exhibition, Romance in the Age of Uncertainty raised £11m and brings over £35m wealth to him. Besides this, his numerous arts and sculpture were sold in millions of dollars.

In 2000, he was sued for breaching the copyright over his sculpture, Hymn, and he paid an undisclosed sum to two charities in an out-of-court settlement.

Hirst also opened a short-lived restaurant in partnership with Chef Marco Pierre White which was closed in 2004, and he sold it for £11 million.