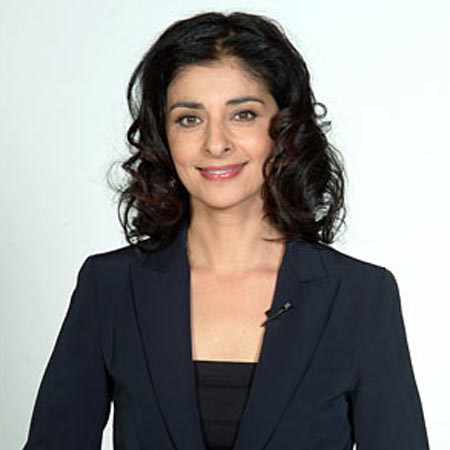 Daljit Dhaliwal is a British newsreader as well as a television presenter, best known for presenting the critically acclaimed program Foreign Exchange also on PBS and the United Nations Television produced 21st Century documentary seen on the CUNY cable television.

Dhaliwal is a former news presenter of the Al-Jazeera English news service that broadcast from Washington DC.

Daljit Dhaliwal was born on 8 September 1962, in London, England. She belongs to Asian/ Indian ethnicity and holds a British nationality.

Dhaliwal was an honorary doctorate from the University of East London.

Daljit Dhaliwal began her career as a field reporter for BBC Home TV News and then became an anchor at ITN World News.

When ITN started the ITN World News, she regularly presented the evening bulletins until the end of 2001. She also presented the news with Andrew Harvey alternating each hour throughout the evening.

Later in 2001, Dhaliwal's ITN World News broadcast was canceled due to lack of corporate funding. She was co-host of the inaugural season of PBS's Wide Angle in 2002.

Dhaliwal moved to the Atlanta, Georgia, wooed there by CNN International and CNNfn to host Your World Today.

Dhaliwal also worked for the United Nations and UNICEF, hosting important conferences in New York City and The Hague, Netherlands.

She continues to work for the United Nations, presenting UNTV's award-winning monthly newsmagazine the 21st Century.

Dhaliwal was sole anchor of Foreign Exchange from January 2008 to October 2009.  She later did the one episode of Global Watch in April 2008.

Earlier, Dhaliwal had been working on and off as a newsreader for BBC World News since 2005, November, mostly as a substitute for Katty Kay.

Daljit Dhaliwal is currently single. Previously, she married  Lee Patrick Sullivan for two years, but they separated with a divorce. She is currently living in New York.

In May 1999, Dhaliwal was named a "50 Most Beautiful People in the World" by People magazine. During the year, Esquire Magazine placed her on their "Women We Love" list.

Daljit Dhaliwal earns an enormous amount of money from her various careers as anchoring, novelist, a television producer who has made her total net worth of $2 million.