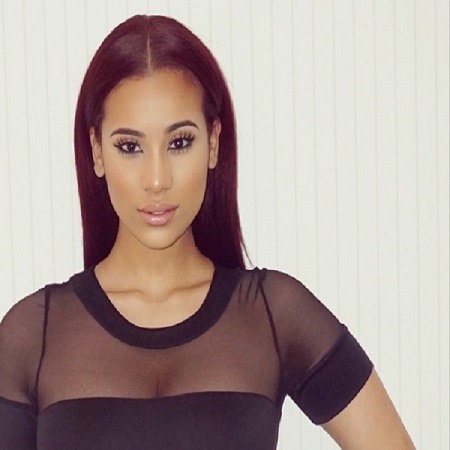 Cyn Santana is an American model and Instagram star best known for starring on the VH1 hit television series, Love & Hip Hop: New York. She has more than 3.7 million and 658k fan followers on her Instagram and Twitter accounts respectively.

Cyn Santana was born on October 20, 1992, in New York, the United States of American, under the birth sign is Libra.

She is of American nationality and as her father is Dominican and her mother is from El Salvador, Santana is of  Dominican and Salvadorian descent.

As for the educational background of Santana, she has not opened up where she has studied at and when she completed her graduation.

Cyn Santana was always interested in being a model and TV star. She was announced as one of the main cast members of the fifth season of Love & Hip Hop: New York. She joined the show along with Erica Mena, Yandy Smith and Amina Buddafly in December 2014.

Prior to her appearance on the season 5 of the VH1 show, she had appeared on the season four of the same show as a supporting cast member.

In addition to being a television star, Santana is also a model and Instagram star. She has been featured on the cover of many renowned magazines.

She has more than 3.7 million and 658k fan followers on her Instagram and Twitter accounts respectively. She has performed impressions of Kat Stacks and Nicki Minaj on YouTube.

Being a successful TV star, Internet star and model, Cyn Santana certainly earns a decent amount of money from her modeling and television career.

Moving towards the personal life of Cyn Santana, she seems to be single right now. However, the web star was previously in a relationship with her Love & Hip Hop: New York co-star Joe Budden.

The former couple started dating in 2016 and three years later, they became engaged after Joe popped the question to Cyn. Unfortunately, the boyfriend-girlfriend duo called it quits just after four months of engagement in May 2019.

Cyn and Joe share an adorable son, Lexington Budden, who was born in December 2017.