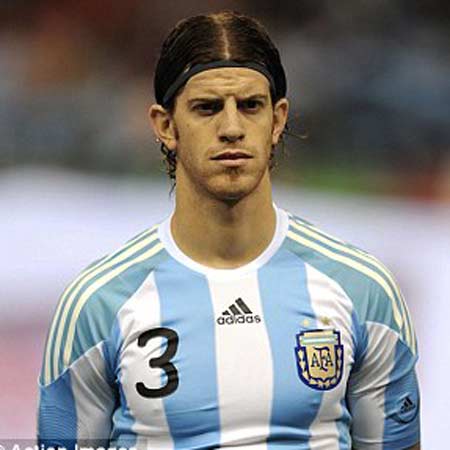 Argentine professional footballer, Cristian Ansaldi is playing as a defender for Italian club Torino. Ansaldi is playing for the club since 2017 after transferring from Internazionale on loan. He is famously known for his defensive skills. He started his football career in 2005 from the club Newell's Old Boys. The defender also played for several clubs like Rubin Kazan, Zenit, Atletico, and Genoa. As of 2018, he was selected in the final squad for 2018 FIFA World Cup.

Ansaldi tied the knot to his longtime partner, Lucila Ahumada with whom he shares three children.

Cristian Ansaldi was born Cristian Daniel Ansaldi on 20th September 1986 in Rosario, Argentina under the birth sign Leo. Ansaldi holds both Italian and Argentine nationalities and belongs to Mixed ethnicity.  He was interested in football from the very early age.

Cristian Ansaldi started his professional career at the age of 19. Ansaldi joined the club Newell's Old Boys first team and shortly after became the regular player. At the end of the season 2007-2008, he appeared in 28 matches scoring 2 goals.

Ansaldi was transferred to Atletico Madrid on loan on 1st August 2014 for that La Liga season. The defender made his competitive debut in the 2014 Supercopa de Espana in a 1-2 draw against Real Madrid replacing Guilherme Siqueira in the 64th minute.

For the season 2015-16, the footballer was transferred on loan to Genoa which included the buyout option. On 31st May 2016, it was announced that his transfer was made permanent for €4 million ($4.68 million) clause but Geno could not make the payment to Zenit, as a result, all his rights reverted to Zenit. Finally, on 29th July 2016, his transfer deal with Geno was finalized.

But before the announcement of his transfer, Ansaldi agreed a contract with Italian club Internazionale believing that Genoa will trigger the buyout option in the loan contract.

Ansaldi moved permanently to Internazionale after a deal with Genoa on 30th July 2016. After joining the club, he was kept out for several weeks due to his ligament injury. On 29th September 2016, he made his debut for the club in the 3-1 win over Sparta Prague. At the end of his first Internazionale season 2016-17, he appeared in 26 matches.

Internazionale transferred him to Tornio on 31st August 2017 on a two-year loan deal with an obligation to buy the player permanently. On 20th September 2017, he made his debut for the team in a 3-2 victory over Udinese. The player made his first goal for the club in a 4-0 win against Cagliari on 31st March 2018.

On 14th November 2009, Cristian Ansaldi was called up for Argentina squad for a friendly match against Spain. As of 2018, he was selected in final 23 man squad for the 2018 FIFA World Cup.

Cristian Ansaldi’s amount of contract with several clubs and endorsement helped him to accumulate an impressive net worth of over $5 million.

As of 2018, Ansaldi is playing as a defender for Tornio from where he earns the average salary of $1.37 million annually. His current market value is €4.05 million ($4.74 million).

Cristian Ansaldi is a one woman man and is married to his longtime partner, Lucila Ahumada who is more into fitness. The couple is married for years without any divorce rumors. The couple shares three children, two daughters and a son.

Ansaldi is active on his social media and has a huge fan following. As of 2018, he has over 133k followers on his Instagram.

Besides, in 2015, Ansaldi was arrested for slamming the car door on policeman’s hand. He was alighting his car, attempting to close the door but caught the policeman’s hand with the door. Instantly, he was taken into custody.